I bought "Black Star" on ITunes. I burnt the disc. And listened to it in its entirety just now. At the end, "La Vie En Rose" played. I looked to see if it was the same CD that "Black Star" was burned to, and it was. Somehow, an accordion instrumental version of the "La Vie En Rose" ended up as the album's eighth song. Obviously, the burn picked up a track from another album that I forget to check off not to burn, but what poetry it was. It brought tears to my eyes. It seemed a fitting mistake to end what was a melancholy week of a life in rose.
Posted by miss moran at 11:12:00 AM No comments:

This issue came to me a week ago? It's been sitting in the pile. I've been deep into Bowie this week because of his death. No, not because of his death. Right before the holidays, I read in Rolling Stone about the making of this new album. I was really excited by it. I watched the videos that had been made to support a few of the songs, and I talked about it to whomever would listen. It struck a chord.

Now, I understand why. It was the work of him dying. And being an Irishman, that resonates and makes sense for me.

The review is sort of a space-time continuum. It had no idea that Bowie would die. And it's imaginings of what the album is shows the review, or any reviews for that matter, its holes. A reviewer can only guess what is behind the curtain. One comment: "In "I Can't Give Everything Away," he states his case for dignity of distance- his refusal to tour (so far) and engage with the media circus ,,,"This is all I ever meant/That's the message that I sent," Bowie sings in a voice largely free of effects- clear, elegant and emphatic." If I can take anything away from this is that he tells me that this is my work. This is the message.

And the message that I have received is one of grace. It is spectacularly comforting to imagine that one can go to the end in the very essence of who one is. He seemed so in control of what he wanted to give last and how to take his last bow. In the "Lazarus" video, when he writes in his diary book, Bowie shows his fear. Or maybe better, worry. It is interesting to watch. And I have watched it again and again. It and "Blackstar."

I've shown the videos to my students who don't really even know who David Bowie is. They are more of the Chief Keef bent. But they dug the videos. And they wondered why his eyes were wrapped in gauze with buttons sewn on to look like eyes. And we talked about not being able to see what is beyond life. How does one know? And one kid asked, 'has anyone ever said what death looks like?' A seventeen year old asked me that question. I said that some who have crashed on the operating table have said that they see a light, etc. But in Bowie's case, and this is what is so mesmerizing for me, is that he isn't seeing a light or a tunnel or a god. He creates in life, what he plans to see in death. He paints it. Choreographs it. Sings it. And it is dark. Blind. Mysterious. Yeah, he goes back into the cupboard. There is fear; yet, he rises.

I love a deeply hued painted wall. And I love purple as evidenced by former writing that I have done. I do not, think nor have I ever thought, to paint a wall purple, but this one is making me think that I need to do it. I'm sitting in a blue room now. One that also has a blue ceiling. I saw it in a magazine and decided to copy it. I've been very happy with it. It may be too large a space to do purple. The turquoise that I can see through the door in the photograph is the color of my bathroom. I use browns, primarily, to compliment it, but the red, seen on the chair through the doorway, really looks lush against the turquoise. And in the purple room, red appears as well. Between my blue and turquoise, I have red ... though, it's more of a deep raspberry color. I tried a truer red once in the kitchen, but I didn't like the look of it. I was trying for a weathered, old barn look and got something else. I like to paint, but I wouldn't say that I have a great talent for it.

I'll tape this photo to the collage that I sit in front of every time I sit at me desk. Who knows, maybe it will stick into my psych and dare me to go purple.
Posted by miss moran at 6:49:00 PM No comments: 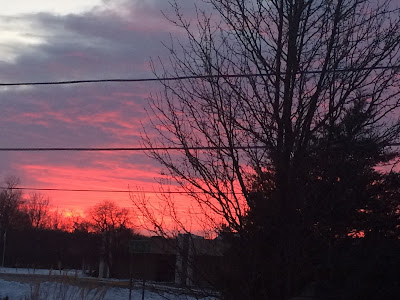 It was a magnificent sky on January 1. A true beauty. I think that it will be a charm for the coming year. It's an even one ... always good ones for me.
Posted by miss moran at 7:57:00 PM No comments: