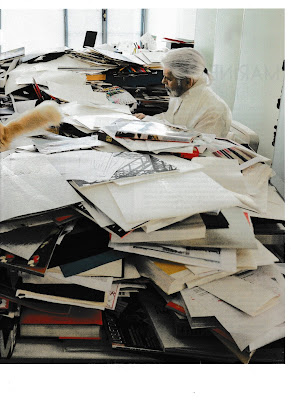 I am fascinated by Karl Lagerfeld. His desk is a place that I would love to explore. In thechaos, some sort of organization has been established ... a method in the madness in the truest sense. And the cat, Choupette, is, naturally, a beautiful specimen, and her tail, I'm sure that she is a lady, has been fluffed for the photograph.

In the piece accompanying the photograph by Annie Leibovitz for Vogue, Hamish Bowles writes,"Savagely unsentimental, relentlessly un-nostalgic, he remains, in his ninth decade, fueled by his insatiable curiosity and passion for the present and the future. "I have a strong survival instinct," he says." I guess so. At 85, Lagerfeld continues the kind of pace that one expects of someone far younger, not because of age, but interest. I have to wonder what made him that he is so focused on design that it seems that it is the only thing that his mind processes.

I am sitting at my desk now. It has moved from its former home of 24 years, and in its former life, I collected, not stacks of inspiration, but magazine clippings and photographs that I would admire as I stalled in putting my fingers to the keyboard. Now, I have a window to look at/through, not a wall. I have not begun to tape the images to the window frame or create a new space for them on an adjacent wall. I'm not sure that I will. I look out now on a windy day and the tall evergreens that I argued so heartily to remove as they didn't 'match' the others in the line along the road and find them to be beguiling. They are tall and wide and seem to be made of beautiful light, intricate lace. Each moves so delicately in the breeze that gusts through it. Black birds flutter in and through them in a system of organization that had I not spent many minutes procrastinating, I may have missed. In Autumn, I wonder at what the scene will look like as the seasons move through the year. Fortunately, the evergreens will stay constant. They will be the stalwart, the base, of what could be come a window of transcendence, but also one that is a comfort in its sameness.

I wonder what Karl thinks about when he looks up from his papers, admires the puff that is Choupette's tail, and considers what is right there in front of him.
Posted by miss moran at 10:06:00 AM