After college, like many, I was directionless. Although my experience had taught me many things, I was not taught what to look for in a job, much less how to find a job. So I moved back to my parent's house and got a part-time job at a store that had always held a fascination for me: Marshall Field's. Before realizing it, I had headed to a place that I had always loved, a department store, so the first step was in the right direction as I worked for that company for ten years.

As a child, I can remember going with my mom to Gately's, the People's Store, in the Roseland Community on the southside of Chicago. The memories are but ghosts with transparent edges as I was but a very small girl. But I have a sense of the bustle of the place and the specialness of a visit there for I know that my mother didn't have the time nor the finance to spend a lot of it in a department store. Last year, some 50 years after I would have gone, I drove to the sight of the store on Michigan Avenue, but not much was left to see. The neighborhood, once a gem, has become the same shadowy memory that is mine of the area.

My family moved further south to Riverdale when I was five. The next department store that I came to love was the Ben Franklin on 144th Street. When I was young, we had an all-access pass to the community. We were free to go anywhere our legs or bikes could take us. Typically that meant that we would roll up to the park or go to the White Hen Pantry to buy a slushy if funds were available, which was a rare occurrence. But when I had a few more cents than normal, I couldn't wait to go into the Ben Franklin. I can remember that store so clearly with its array of trinkets and treasures. For whatever reason, and this is true today, one of my favorite aisles to shop was the office supply one. I loved to look at the pens, paper, clips- all of the little things that were so neatly ordered on the shelves. I used to dream of getting locked in to Ben Franklin and having to spend the night. I would plan out which aisle I would go to first and which aisle I would spend the most time in. I didn't think that I would ever sleep for the time it would take to investigate every aisle.

Not long after I began working at Marshall Field's, I was given more and more responsibility. I was a college graduate after all. Or maybe it was because I was just a natural at merchandising. My manager could just tell me where the boxes were and she knew that I would do my thing. I loved the challenge of organizing merchandise. The first department that I worked in was Accessories. In the summer, I would arrange hundreds of pairs of sunglasses on the towers and get every pair out. I can remember one display case that I was particularly proud of that contained expensive evening bags where I placed dress shoes to make the display show off the coordination of the two products. The bags sold out.

After a year of working in Accessories, I was offered the job of assistant manager for the dress department and The County Shop. My manager was an old stalwart who wasn't too happy to get me. While I was working at that store, I was trying to figure out my own style. Coming off college as a new waver, my hair and clothes were not, I can see know, quite appropriate for a suburban branch of an upscale retailer. But I had skills and someone was noticing it. Bernie, the manager, didn't want me around the dresses. The dress department in this particular branch had the highest dress sales in the company. I suppose not having any competition contributed to this. I was exiled to the Country Shop.

The County Shop was the life work of buyer Beverly Miller. For the Country Shop, she built a business whose base was Ralph Lauren. Then she layered it with her private label brand that was truly private label at its best. It was a luxury brand, not the nonsense that fills Macy's today with the likes of Alfani and Charter Club. It was an interesting post for me as I did not claim the polo/country club aesthetic for myself. Coming out of my punk phase, I had entered a French phase. I had my mother sew me a black skirt, I put on a black sweater, and I would layer resale purchased strands of pearls and gold chains. Chanel was my muse. Maybe that's why Bernie never liked me. 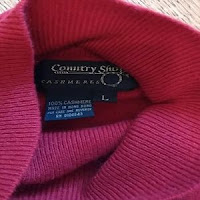 Or was it because I was good at my job. Miller put together a look book for The Country Shop every season. No expense was spared and the merchandise was lovingly shown on models in luxurious country surroundings, very like Ralph Lauren has become. I loved to work with the cashmere and woolens, layering them on the mannequins and working with the display department to make the shop look like one of the photographs in the look book. Bernie told me one day that the lady herself, Beverly Miller, was coming out for a visit, probably because sales were up. Instead of a "I got you" moment, Miller was impressed with how I was able to display her vision. We got on wonderfully.  And though the clothing was not for me, I appreciated it and treated it lovingly. Needless to say, I wasn't there long before I was called up the show: the downtown store.

And Ralph Lauren has been at it for 50 years. I still love to look at his look books or pages in fashion magazines. Ralph was in the game at the time that I worked at The Country Shop, but he wasn't where he is now. I wonder if Miller and he ever met? They seem so similar in their view of what the world should like. I have a couple of pieces of Ralph, but they aren't favorites. His cut is a mean one and very up and down when I need a little bit more forgiveness. But I love looking at the pictures. He's good for that. Miller? She always sold a good cut with luxury fabric. I remember a navy linen suit that I bought from one of her collections. It was one of my favorites, more so for having worked with her and seeing first hand her talent.
Posted by miss moran at 9:01:00 AM