After Rest, God Made Beckham

I'm happy to see that my Vivienne Westwood hat wearing friend is kicking it old school for his new album. I gave a listen ... it's a little of this, a little of Prince. And it is pure joy. Nothing heavy or complicated. He has found the light and puts it on heavy rotation.

In a Friday night party for one, I pulled out the old stuff from the 'ole girl, Madonna, and danced my arse off. It just felt so ... happy go lucky. I've been trying to give Madonna room for being fresh, new, innovative, but ... she just isn't the same. It's as if she is trying to hard. Well, that's a dumb statement because everyone can see that about her. She's so unsettled with what life brings to us (age ... in little words and hushed tones) that it is uncomfortable to watch.

I read in this edition of Rolling Stone or the next one, I can't remember as I'm a bit behind and power reading, that she is now working with Avicii. I love Avicii. Wake Me Up is one of my favorite EDM songs. And I know that as she goes to her next, she's always looking for the newest to prove that she's still relevant. But she becomes irrelevant constructing a sound that is more them than her.

When she first really pulled into the electronic DJs, I think that it was with her album Ray of Light. That was the best of her second generation albums. It was buoyant. And, for the most part, a good listen, or dance if you, will from beginning to end. The next couple: Music, American Dream, Girls Gone Wild; they have glimmers of fabulousness, but they are inconsistent. Some of the songs make me cringe: are you for real Madonna, this is stupid and juvenile. I can take silly and juvenile from your 26 year-old self, but 45 or 50? Haven't you learned anything? Maybe not. The head is turned back so much that you may miss what's ahead of you.

If I could talk to Madonna, I would say, "kick it old school, girl." That would be fresh ... different from tongue-girl, snake-girl, weird-girl, and makes bad choices in boys-girl (I'll let you fill in the blanks). I'm pretty sure that you have worked with Pharrell before ... give him a call again. Or get Nile Rodgers back on board. I want to explode in delight with a bouncy and hook'd Madonna-groove, not Madonna on Avicii's youthful good looks, sound, and established fan base.
Posted by miss moran at 10:17:00 AM No comments:


Reading my Rolling Stone magazine on a windy March day ... I stopped at the Carrie Brownstein article. I have always meant to check Portlandia, the show she writes and stars in, out but haven't gotten around to it. I had the idea that she was a musician, but didn't realize to what extent. As soon as I finished the article, I thought that now was as good as any other to check out the show, which I did. Oh sure, I chortled through an episode ... but I don't think that it will going into any heavy rotation. I get the joke, it was funny, but not so much that I need to watch it more.

But Brownstein's band on the other hand ... too bad that I caught them after their break. I checked out a couple of their videos on YouTube, the live ones are best, and I'm smitten. If I were in a band, they are what it would like ... driving, smart, and cool. Of course, I'm not so sure that I am any of those things, so it's probably best that I am a fan.

Here's hoping that what Brownstein says in Rolling Stone is true ... that the band might come back together. I'd be up for a rotation of that, for sure.
Posted by miss moran at 11:15:00 AM No comments: 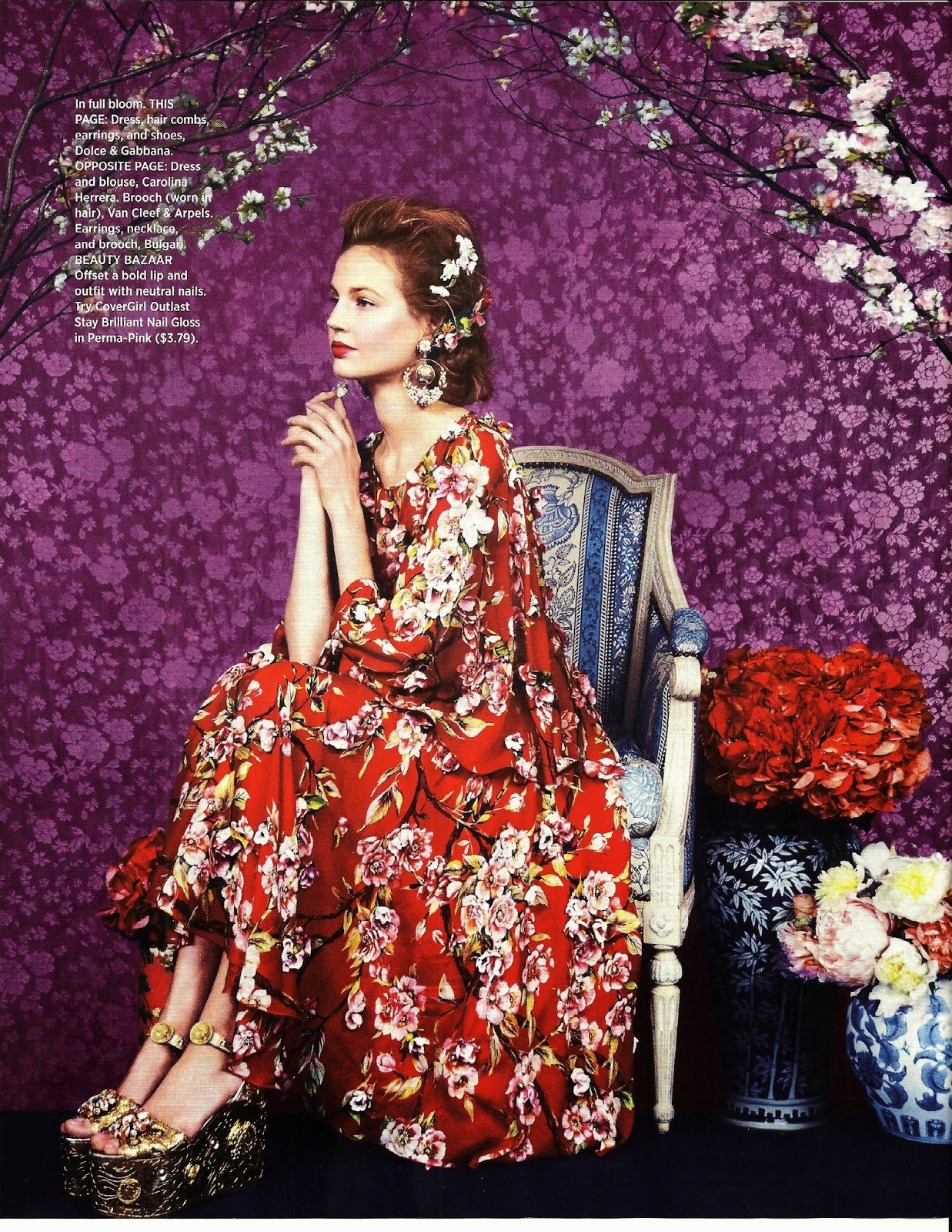 In the March issue, a lovely editorial, shot by Erik Madigan Heck, studied color, pattern, and florals. I like to look at it, especially after this particularly pale winter of constant snow and frigid temperatures. The flowers remind me of traveling through the South Pacific, or through the heather'd moors of Scotland, or anywhere other than what it's been here for the last couple of months. I can hardly wait, and wonder if it will ever come, the morning that I walk out and meet a warm breeze and run across the first hardy blossoms that push through frozen earth first in Spring.

This one, pictured above, is my favorite of the 'anything worth doing is worth overdoing' classification. I particularly love a red/purple combination.
This one on the below is very Frida Kahlo, of course! 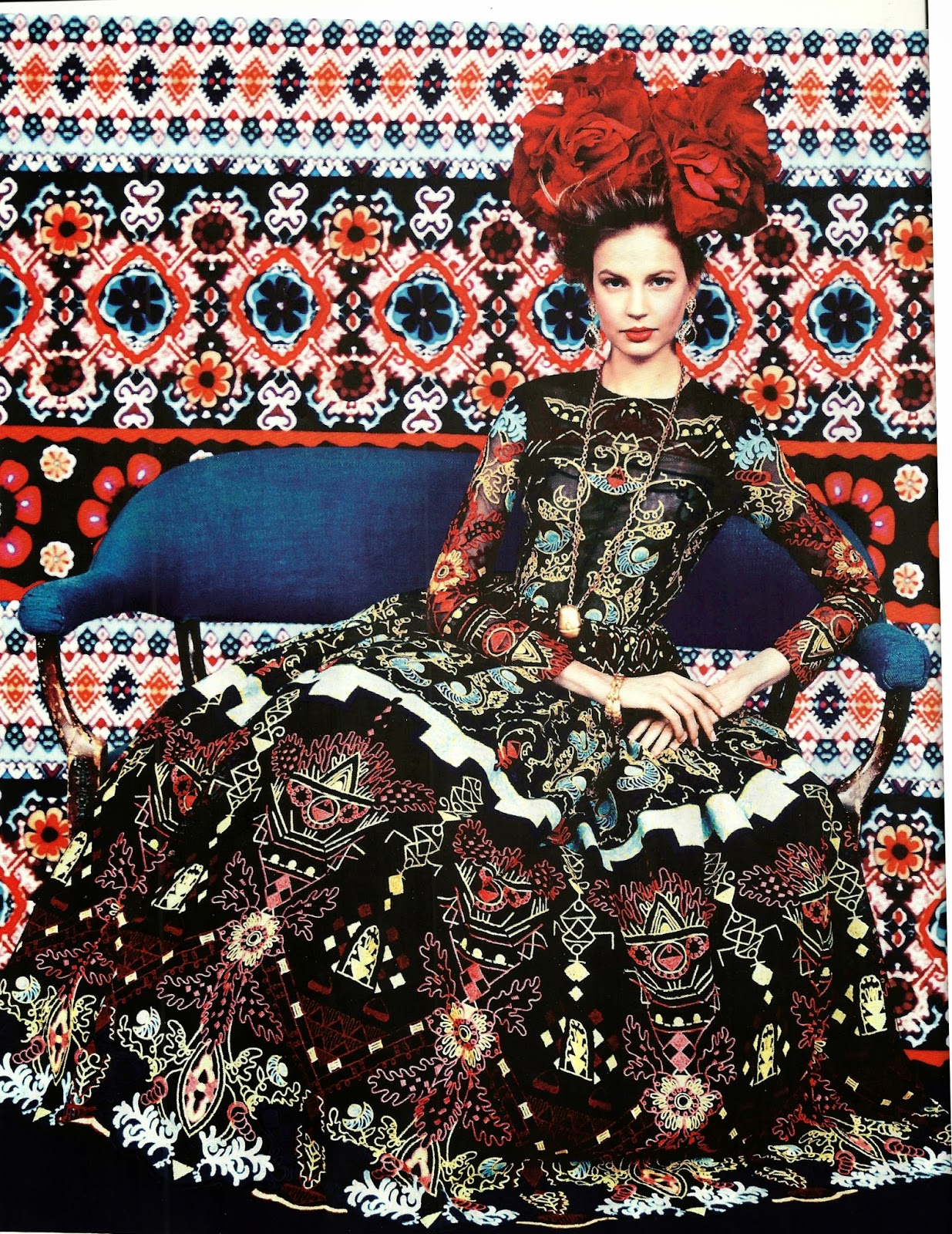 It's spectacular how all of the colors of the dress work perfectly with the colors of the wall behind this queen. Even the shapes that make-up the wall paper look designed by the same maker as the dress. I would love it if the head piece were actual flowers, though it is rather grand even as it is. In Spain, I bought a mantilla. It is a beautiful black silk with embroidered red flowers. I almost wish that it had all the colors here as well. The peacock blue stands out and plays well with the orangy red. I wonder if at the neck it  is a skeleton's head? What do you think ... it's almost a mash of Latin and Asian. If I squint, I see dragons holding up the skeleton whose lips are painted red. 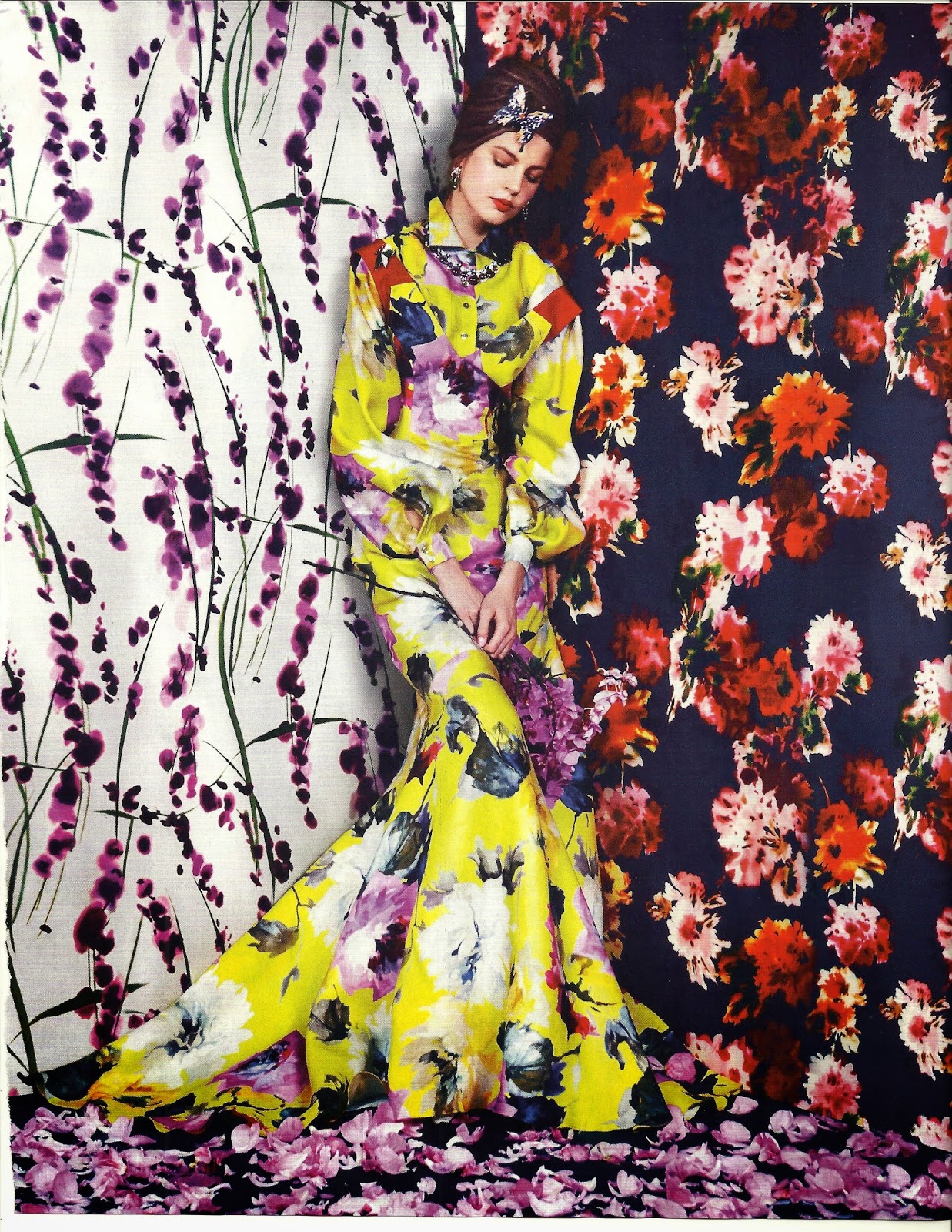 This is the last that I will share. There's something to the lemony and bright about this dress. I don't usually like yellow, but this particular hue is alright by me. I love the opulence of the large flowers that fall over it. The walls are a little dizzying, and it is difficult to decide which compliments the dress best. The navy wall with red/pink flowers match the intensity of the dress, but the whispiness of the lavender blades reminds me of a net ... perfect for trying to catch the butterfly near to the model's head.

Oh, Spring. Come quick. Oh wait, you are here already by this date. I'll have to live in the two dimensions of these pages, I suppose if I'm to have sense of what is to come.
Posted by miss moran at 6:51:00 PM No comments:


On a Sunday magread, I turned the page and ... Nikolaj Coster-Waldau, the bad boy of Game of Thrones, a series that I've never seen, but have always meant to. I am going to have to check it out.
Posted by miss moran at 1:48:00 PM No comments:

I want to live in this photograph. It is breathtakingly romantic. It brings me to all of the wide beaches that I have seen and imagined just this sort of being. The sea brings such a longing naturally. The expanse of it, like love and passion, is indomitable as it spreads out beyond the horizon to places found only in the imagination. And the imagination is exactly where I like to live out love and its passion. I understand it there.

Ralph Fiennes, a particular favorite of mine, directs and stars in this film about Charles Dickens' romance with a woman not his wife. I have not been aware that Dickens had this life, let alone ten children. I read him in high school, of course. But his work was not one that I studied once in graduate school. In a Victorian Literature and Art class, a passing mention was made to his work, and my final paper was written with how his writing catalogued the industrial revolution, but focused on whether  the work of painters at the time demonstrated the same theme. My paper focused on Turner's Rain, Steam, and Speed, which definitely plows the industrial revolution across the canvas by way of a huge locomotive engine ripping across pastoral England as a nearly imperceptible rabbit cowers in the corner of the frame. In Vogue, the photograph above is likened to a Turner painting, and for me that is enough if more of the same is displayed on the screen to tell the story of this man that I know very little of.


I was driving home from work today. A March day. A snowy day. Cold. Still.  But on the alternative radio station played Pharrell Williams' song 'Happy.' And how could I be anything other than happy hearing it? I was stopped at a red light, tapping my foot, all of my teeth showing when I saw a guy on the sidewalk looking right at me smiling back. He saw the joy emanating from my little car that sat on the cold corner.

We'll make it through this ferocious winter ... with a little help from our Happy friend!
Posted by miss moran at 5:42:00 PM No comments: