oh Soames. I don't watch Homeland. I've heard that it's good, and I would ... but I can't see getting beyond Claire Danes. But this isn't about her. It's about Damian Lewis who stars as the double agent, or whatever he is. Every time that I see his picture, I can't help but think ... Soames. Soames, of course, is his character in the BBC Masterpiece Theatre's Forsyte Saga that was produced over ten years ago. I just happened to see it a few years back, and he, Damian Lewis, is one ginger that you can't take your eyes off of for a minute. Though he played a controlling, kind of pitiful character, an energy poured out of him that was quite magnetic.

Here, he poses his wife, Mrs. Malfroy!, in London, their home. He says that it is very Rob Reiner scene, but I think it's elegant. They make a rather handsome couple.

I have the Forsyte Saga, the novel, at home. I haven't ever read it. In looking up the spelling of 'Soames,' I discovered the novel was a favorite of readers during the '20's. It is a big book, and apparently it was published in three parts. I may have to dig that book out, dust it off, and give a read. Each page will bring me to Soames. And I'd like soame of that!
Posted by miss moran at 12:22:00 PM No comments:


Flipping through the pages of UK Vogue, I saw the Prada coat on the left. OK. I turned a couple more pages and found the Celine slippers.

Wait a minute here. What am I looking at? House clothes. I flipped back to the Prada. Yes, it sort of looks like a fuzzy bathrobe. One that my grandmother would wear. One that would be wrapped up in flowered box for Mother's Day. And the Celine ... really fancy house shoes. This girl has apparently gone out, found her heels too ... tight, and so changed into her slippers.

Ordinarily, I'm very open to different, but I think that I'm spotting a trend that I think is rather ... silly. I can't quite see what the fabric is for the coat. It looks almost fur-ish. She should kick off her flats and put on the slippers. Now that would make an outfit.
Posted by miss moran at 5:17:00 PM No comments:

Scouse seems to have made it across the ocean ... nearly around the world. Certainly not as dramatic as the Liverpoolian browed fashionistas, but in kind any way.

I was given a make-up consultation as a gift last year, and I'm not one to those. Oh, I love make-up ... but always feel strange having someone look so closely at what I know so well: my face. Interesting that she made my brows, which are substantial, darker. As they are, being a strawberry blond, they are rather golden. She made them out very ... brown. I didn't know the pumpkin face that looked back at me in the mirror.

In this bit, they feature Jennifer Connelly ... ok. She always has a heavy brow, Irish lass that she is. And Elizabeth Olsen ... she's going to have work on some heft to make her's remotely statement. I've heard some women use Rogaine to aid in eyebrow growth ... my sister fell victim to a complete tweeze in high school ... OUCH! And her's have never quite grown back. I think I've heard her mutter something about the hair growing elixir. Maybe she should just tattoo them on!
Posted by miss moran at 8:38:00 AM No comments:

oh, Sue Heck! You and your eternal optimism and can-do spirit is rapturous! Who hasn't run up against a mean girl or problem or situation and wanted to kick its butt. And Sue does it in her way, no compromising. Why should she? To quote Mr. Darcy, 'she's fine just as she is.' And it is a testament to the fact that even if one's life view is off-kilter, different from the mainstream, doesn't mean that it doesn't work. I'm not so sure that Sue thinks of herself as different, and that is the beauty of it. She has confidence in herself. She believes in herself. And she thinks she is a damn fine cheerleader. Her spirit is what wins the approval of the school. Cause, we're all a little like her ... own what and who we are even if it isn't what the popular kids are doing. Perhaps, we need to all be more like her.
Posted by miss moran at 5:54:00 AM No comments:

In a lesson on the 1st Amendment, my students couldn't quite grasp the idea of not having free speech or free press or free anything. Their understanding of the greater world is ... naive.

And so I introduced them to Pussy Riot and their Punk Rock Prayer. I think that I got through to some of them that freedoms are villainously restricted in many parts of this world, but what captured their attention most, and given their  narrow perspective on the world as they are teenagers, and they are Americans, was the fashion. That's what stood out to them.

And then I read this piece in Elle magazine last month, and I thought, hmph. There's something to this about how we, women, arm ourselves for important events with what we wear. Not too many weeks before this lesson, I had an appointment with my principal to go over performance data. I wore a new outfit. It was a little different for me as it was pants, and typically I wear dresses. But the jacket is sweet, and the blouse a beautiful patterned silk with a self-tie. Very unlike me, but it felt really good. And when I heard that he had left the building for a meeting ... I was ... disappointed. I had on a new outfit. It was going to give me power and confidence. I was going to win him over with my work, yes, but I would dazzle him with glad rags. Luckily for me, he came back. And the outfit did not go to waste. Did he notice? Oh, probably not. But I imagine that it really wasn't for him at all. It was for me.

And so I have gone through times and outfits, and I've found a connection that is very real between what I wore and what I did.

First, the purple crushed velvet skort with the brass buttons that I wore with a white blouse with billowy sleeves and patterned with little purple violets that I wore to the Bozo Circus show. That was a big deal getting to see Bozo as I've mentioned, I'm sure, before. I had a whole parade of outfits that I remember very clearly from my childhood. I probably remember them so well because I had so little to work with. Thankfully, my mother sewed, so whatever I would come up with, she would do her best to copy it.

When I was in my Shawn Cassidy phase, I scored some tickets. I stood in line at  Sears and was able to get 2 tickets. Plus, I met a girl in a line, older than myself, who offered to drive my friend and I to the concert. What luck! Now the outfit ... on Shawn's album cover, he wore a satin baseball jacket. And I became obsessed with having the same. At that moment, they were not available in the stores (a few months later, they were in Limiteds across the country). I dragged my mom to the fabric store and we found a pattern for a jacket. It wasn't a baseball jacket, but it was close enough. Of course, it had dolmen sleeves ... but that was ok. I picked out a beautiful baby blue satin backed charmeuse ... it wasn't stiff at all. It was liquid, and it was, in my estimation, the same color blue as Shawn's eyes. My mom made it just in time to go to the show. Did it look like a baseball jacket, like the one that was on the album ... cover, no. But, I will tell you this ... no one in that stadium had on anything like it. I was da doo run running heaven. And I remember it so vividly.

I could go on for days mulling over all of the outfits that I've given to events/beliefs/feelings. Fashion is a disarming or approachable or killer statement of what one is bringing on.

Pussy Riot definitely represents.  In brightness and color blocking, they are a light in what seems to be a very a dark Russia.
Posted by miss moran at 10:24:00 AM No comments: 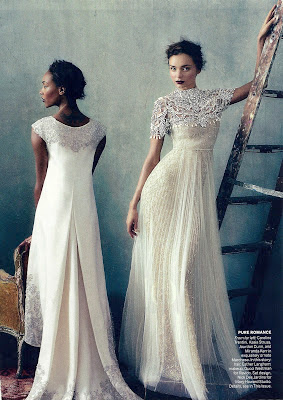 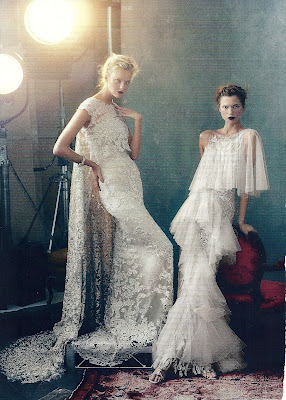 Found in this month's Vogue, these Marchesa lovelies, and I do mean the dresses, make me feel like ... I do. They are ethereal, delicate, dreamy. I imagine a long happy life would be granted to she who walked down the aisle in one of these creations. Oh, they aren't necessarily bridal, but it is what sparks me. I suppose it might have something to do with the fact that I watched the film Cold Mountain last night ... one of my favorite romantic stories. How can it not be as two souls keep each other in their hearts and look for one another for years without giving up, only to find each other if only for a moment. When Ada says to Inman, 'I will marry you, I will marry you, I will marry you, I will marry you ...' I hear heels click, a certain kind of magic, and the sense of doom that is bound to meet them. Oh, but if she were wearing one of these, I think, perhaps, it might make the loss a little less ...
Posted by miss moran at 8:42:00 AM No comments: