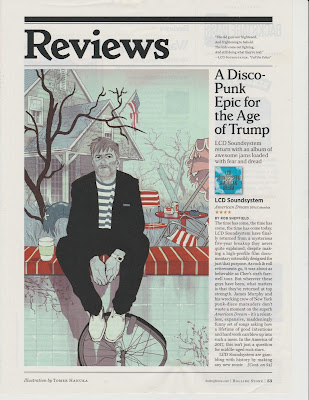 I was driving home from Sunday dinner with my Mom and heard the first single released from LCD Soundsystem's new album, "American Dream." Usually, the drive home on Sunday nights is full of the oldies or the Casey Kasem count down vault from a year like 1977, but a month ago Sunday, all changed when I heard 'tonight.' I nearly swerved off of the road ... what the heck is this super groovy music? I had to wait for a whole week after that to purchase the album. I spent the week listening to the radio waiting patiently for the song to play again in the rotation.

When I first got a hold of the album in its entirely, I confess, I hit #5 over and over again. I couldn't get enough of it. But then #6 moved into the repeat spot with is sweeping, U2-esque stadium melody. And well into a month of owning the album, I can honestly say that I have wrapped my head around all of it. For as much as some of the songs remind me of others like Bowie, the Talking Heads, and David Lynch (one song sounds like one that he would pick for a movie like "Blue Velvet"), it different- fresh and modern. It is Angry angsty, yet there is a naive sweetness and disbelief in what has become of our America that is quite charming and believable. I won't review the album beyond this ... listen for yourself. You'll find yourself wanting to hit the same button for the same song over and over ... until the next one comes to take over your psyche.
Posted by miss moran at 8:20:00 PM No comments: