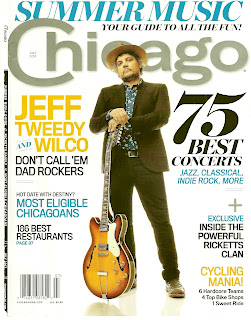 I love Wilco! Late to the game, I didn't really listen until Yankee Foxtrot Hotel, and my favorite record of theirs is Sky Blue Sky, which may not be the critical choice, but it is the album that works for me. It's lyrical, honest, and at times, incredibly poignant. And the cadence of it makes me want to ... move or fly or something into a blue sky. There is a subtly to it that borders on the sublime. As soon as I hear, "Maybe the sun will shine today, the clouds will go away," I'm transported to a level of ... groove.

Plus, Jeff Tweedy has a good sense of humor. A few months ago, a friend sent me a YouTube video of him at a concert. Well, here it is:


He's one artist who pays attention to his audience. I get that. One may think that an artist always connects, but I've seen enough live performances to know that is not always the case. At the same time that I received this, I was in a new school year and my students weren't paying attention to me. Now, not all teachers mind that, or acknowledge that, or care. But I want that connection. I pleaded my case to no response. I pulled out my cart and pulled up this video! That certainly got their attention. My students aren't likely to know who Wilco is, let alone Jeff Tweedy, but they got the point. And it was one of those moments that came up every once in a while ... remember that time Miss Moran when you played that video of that guy who asked his audience to be quiet? uh, yeah! Let's practice it. He became our zen.

In this month's Chicago Magazine, Tweedy is featured. The section here tells of how he ended up giving a private performance in a home of a group who donated $28,000 to Second City's annual Letters to Santa benefit to host it. He encountered more of the same naughty, disengaged, behavior: 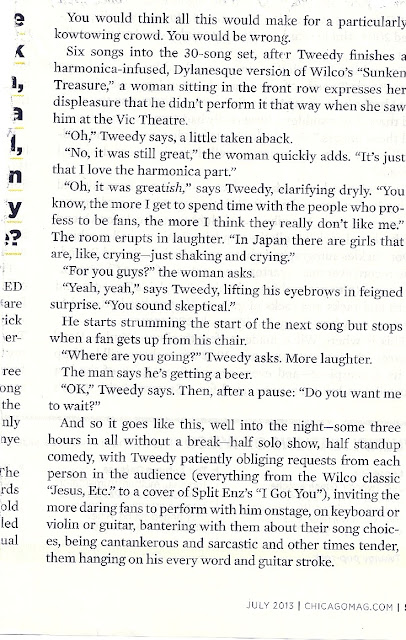 I've heard Tweedy speak enough to hear this in his voice ... "do you want me to wait?" I can't even imagine. The man is in my living room and I'm so ... spoiled that I'm not stuck tight to the space he's taking me.

Mr. Tweedy, you can come hang out with me anytime. I'm a good walk down Western avenue for you. I'll get a cooler, and you can just go. I may float, won't cry, but I'd love every moment of you giving something ... different from what I heard before.
Posted by miss moran at 2:07:00 PM