This summer I traveled to Europe with my sister's family: her husband and four children. It was a wonderful trip to Vienna, Austria to Bavaria to Prague. Enrique, my brother-in-law remembered touring the area years before and wanted the kids to see it. I had been to Vienna and Prague before, but never Bavaria. And I didn't know that "Mad King of Ludwig of Bavaria' built a castle that Walt Disney would build an empire with it as its signature princess castle.

The day that we visited the Neuschwanstein castle, Europe was gripped in a heat wave. Heavy air sat on us as we tramped up the hill, up the stairs, and up some more stairs. So many people were on the tour that I wasn't really able to hear the docent describe what I was seeing. I decided to just hang back to catch any air that might move through the darkness of the stone edifice. I've visited plenty of castles in my travels, and I wasn't quite convinced that this was magical. It was like the air: heavy. But the story is an interesting one, and once I was able to catch up to my people, I heard my nephew say to the docent, 'didn't they kill the King because he was gay?' Well, that is interesting. The intrigue of it. 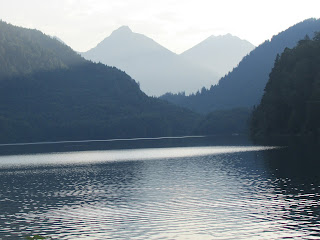 Once down the hill and revived with a couple of beers, we walked over to the lake. Its water was so clear. First my youngest nephew then brother-in-law stripped to their skivvies and dived in. My 11 year old niece was shy, but once wet with the water that the boys shoved at her, I said, 'let's go.' And I enjoyed the happy and cool party enjoying the Alpine view and sweet water. As it turns out, King Ludwig learned to swim in the very lake. The magazine described it beautifully: Along the banks are tall pines, their branches shaggy with freshly fallen snow, and up above, mountains whose dark reflections quiver in the lake's icy water. For us, the water was incredibly icy fresh, but the snow was gone, and the mountains were even more dark without the snow. There, I felt the allure of the place.
Posted by miss moran at 7:33:00 PM