The new year started out sunshiney with a visit to Buddy Guy's Legends to see the man himself: Mr. Buddy Guy. I had read in Rolling Stone that Buddy sits in residence every January, four nights a week, and I thought that I needed to see this cat before all of the blues' greats have faded into their good night. Buddy has been coming up in conversation having seen him in the recent Netflix/Keith Richards' documentary and several mentions in Rolling Stone. I've lost track of the article that the photo above is torn from in my pile. But what I remember most about the article itself is the joy that is the heir apparent, grandfather of the blues. He totally embodies it. And that he represents what is a truly American art form, I had to go. 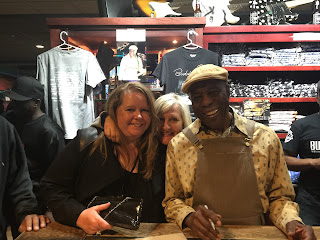 Going to see Buddy Guy was an experience that I will not soon forget. Not understanding the significance of the event, my party arrived after he had started to play at 10 p.m. and discovered that most of the seating was standing room only. And those pilgrims who stood, lined up happily and respectfully behind velvet ropes. To sit at a Buddy Guy show, one must arrive to the club, as it happens, at noon. One of the delightful bouncers ... and I mean it; everyone who works at Guy's club is as warm and engaging like the man himself ... told us that they line up early and pass the time at their seats playing cards. Some hunker down and taking turns returning to the hotel across the street. It is apparent that people travel from across the country, and probably around the world, to see Buddy.
We were late. Unfamiliar. And had drank some beer before going, so we didn't quite follow the rules and snuck in behind the tables to get a close-up look. After a while, we were shown to the ropes, but that worked out fine because Buddy took off with his guitar to weave his magic through the crowd. He stood right in front me and dazzled. He filled me up with a feeling of pure delight and goodness. Any edges or worry were taken away with the movement of his fingers across the strings of his guitar.
The show was over in a flash. The club emptied, but we sat at the now available table absorbing the vibe. We finally got up to leave and around the corner, Buddy was meeting and greeting all of the patrons. What a treat! And if you bought a poster, or a brought in your guitar, he signed it for you. My buddy bought a poster for me to have Buddy sign it for me. You can see me, and my friend Sue, mugging for the camera with our new friend. And look at him. It's gotta be 2 a.m., and he is grinning ear to ear.
Buddy may sing the blues, but his heart and soul is anything but, and he is happy to share it with anyone who will listen. I gotcha. And I believe.﻿