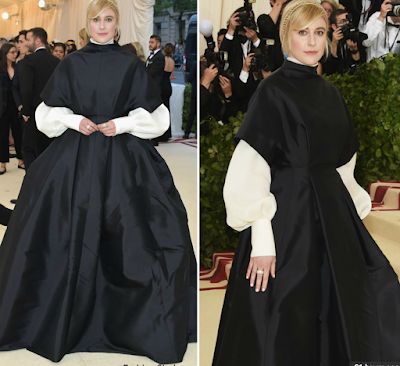 And the winner is ... Greta Gerwig.

After I spent too much of my day analyzing the gowns worn at this year's Met Gala, I have chosen Gerwig's look as my favorite. All day, I imagined the images flashed before me as I nodded- yes, no, yes, no. Most of the nods, I fear, were no's. Too many women wore what they typically wear. Whether is was extravagant, skin baring or artful, the ladies showed up in the same ole, same ole ... just a different color. 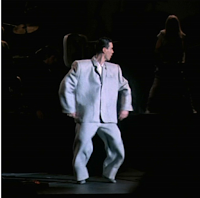 When I was looking at the bird cage on the head ... er, nativity scene, I thought what the lady in question should be wearing is black- head to toe and severe. Punk in its absence of form or function. David Byrne punk. Larger than life. Body-less. Too many of the women who wore skin grazing silks were neither, in my estimation, "heavenly bodies" nor of "the Catholic imagination," which was the theme for this year's Met Ball. What they looked like was the stereotypical 'sexy witches' that every teenage girl across America has thought was a good idea for a Halloween costume. Oh, I am not kidding about that. Once I volunteered to be a part of a haunted house for a good friend of mine who would organize one for his church. It was very un-church like as it was truly a haunted house wherein the Grim Reaper, my friend, would guide ticket payers through a maze of one grizzly scene after the next. He had asked me to be a witch, who would stir the potions of bone and spider in a giant paper mache cauldron that he had crafted and built into it a fog machine that made it particularly spooky. He had asked several of the teen aged girls from the church to dress up as witches to work with me in stirring the brew and spooking the crowd. Naturally, the girls showed up all vamped up. That was a day working with those teenagers and their their sexy witchiness when we were meant to be scary.

That's how I felt this year's Met Ball went. All of the models and personalities and actresses sexed themselves up when it was meant to, in my opinion, represent the severity of what can be the costumes of Catholicism. But Greta Gerwig, she got the message. And for me, she stood out as severe, punk and ... dare I say, sexy. Covered from head to toe is looseness, with a wonder of what was beneath the folds of that silk taffeta.