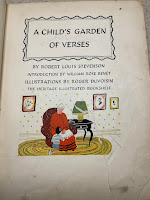 While putting away Christmas things, I moved a stack of books that I had hidden from view. It was a stack as many who 'decorate' use as a focal point of interest on the shelves of side tables or displayed on coffee tables. I'm not sure if anyone who visits the house ever opens up one of the books on display, but this time, I took the time to sort and look through the books that are used mostly as dust collectors. Robert Louis Stevenson's "A Child's Garden of Verses," I remember very clearly from my childhood. I am not certain how it came to the house. I do remember reading it when I was young.

As a child, I loved the illustration on the cover. Even now, it captures the spirit of what I remember childhood to be for me. My mother would sew jumpers, a simple dress without sleeves that fell from shoulder to knee, often with two pockets on the front for me to wear to school. Underneath the jumper, I wore a white cotton, peter pan collared blouse. I typical wore scuffed, brown leather shoes that were bought new at the beginning of the school year to last the year and white socks. My favorite jumper was cranberry colored, wide wale corduroy. My mom would braid my long hair into plaits that were turned up in circles close to my ears. In the illustration, the girl leads the others in what appears to be an adventure. As young as third grade, maybe even earlier, I too would lead the younger kids in the neighborhood. Or coerce my younger sisters into playing at some planned activity, often centering on a song and a dance or, for one Christmas, a recitation of the "The Night Before Christmas." 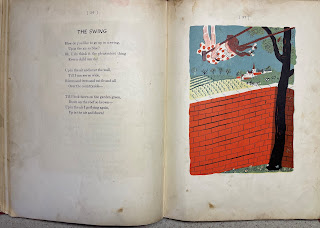 My favorite poem in the book was "The Swing." Like many elementary schools, ours had a park nearby. Occasionally, we were allowed to run over to it during out recess. I loved the swings more than anything else in the park. Once I got going, I felt like I could fly so high and see the whole world. In my estimation, it was "the pleasantest thing/Ever a child can do?" Without being aware of it, the poems also taught me how to communicate using a different form than speaking or writing a sentence. Without understanding poetics, I sensed that if I wrote a poem about a subject, I could fully describe the feeling or emotion of the thing I was trying to describe in order to get closest to the heart of what it meant to me.  Technically, the poems taught me how to write a poem. All of the poems are written in stanza form and in a rhyme scheme. Sure, nursery rhymes and children's books are written using rhythm and rhyme and I would have had that earlier exposure, but for the most part, those devices were delivered in a sentence or two, not in an organized stanza format.
In third grade, the teacher created in class clubs for us to join. I chose the poetry club, possibly because I wanted to write like Robert Louis Stevenson in "A Child's Garden of Verses." I don't know this for sure, but in examining this long ago book that I cherished, I can't help but think that it was the catalyst for my own poetry writing. As I look back on it, the teacher didn't teach poetry to class. Nor did she go over basic principals of what a poem looks like. Once in the club, I took it very seriously. I created my own book of poems using the techniques that I had picked up from Stevenson. How else would I have known to write in stanzas and develop a rhyme and meter scheme.
For the Park School Third Grade Poetry club, the teacher introduced the idea of a prize for the student who wrote the most poems. I got to work. I was always a competitive student. I raced to get through the Math problems first. I never received a prize for getting through problems fast, but I was always satisfied that I had. I knew that I had a chance to write more poetry than the others in my class. I was motivated.

As you can see, my first book of poetry has seen better days. It is old! And I've kept it all of the years as a testament to my earliest work as a poet. Clearly, someone got a hold of it and wrote with crayon across it. I notice that I did not use a pen; rather, I wrote the title and my name, barely visible on the bottom, in pencil. Did third graders use pens? I did include illustrations, as you can see, with each poem. When I composed the poem and wrote the final draft, I did include those. The letter grades and corrections I may have done when I would play school. Good for me that I thought that the originals could do with an edit. The handwriting is so perfectly 'I just learned the Parker method of cursive writing.' The 'Ts' are stellar. 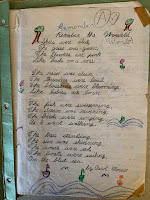 "Remember the Wourld [sic]' was the epic poem that I wrote. I think about this poem sometimes and wonder if climate change was on mind. What about my eight year old self would think that I would have to remember blue skies, green grass, and all of nature that I had experienced up to that time. I would have been in Brownies as the time. I probably had made a sit upon and a dunking bag. Both would have been used for outdoor adventures. I had an awareness of nature.  Was something going to change it? Or was I aware of how I was changing. Would it be important for me to remember who I was at eight.
I wrote about ten poems for my first poetry collection. I was very proud of them and was happy to turn them in for the contest. In addition to remembering the world, I also wrote about each of the seasons, rain, Valentine's Day. It is an auto biography in verse of how I saw the world. For the most part, the tone was optimistic, however, a small cloud sat across a few of my thoughts. I think that could be said for who I am now too. I didn't win the competition. Another girl in the club copied out poems of someone else's pen and was able to turn in many more than me. I didn't get it. Mine were original. I was happy to go back to the ease of getting the math problems done faster than any one else in the class. It was an immediate gratification. The long haul sense of accomplishment comes now as I look through the yellowed pages of my life then. It was definitely not a copy. It is a testimony of the original.