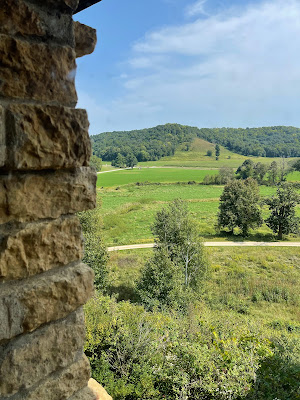 Once off of the Interstate, the Wisconsin River Valley showed itself in all of its beauty. Rolling hills, broad valleys, small lakes, and impressive farms rolled past as I drove toward Taliesin, Welsh for shining brow, Frank Lloyd Wright's home there and the area to which he was born (picture left of a view of the environs from the house).

Wright’s home, studio, and garden sanctuary was a laboratory for architecture and design. In its three iterations, Taliesin embodies Wright’s ideas of organic architecture, expanded and refined from his earlier Prairie School works. From the courtyards and gardens to the Living Room, Loggia, and Birdwalk, Taliesin offers a commanding view of the valley, settled by Wright’s Welsh ancestors. Using natural local limestone and Wisconsin River sand, Taliesin stands as “shining brow” on Wright’s favorite boyhood hill.  (taliesinpreservation.org/history).

Not a Frank Lloyd Wright fan specifically, I decided to drive up to Wisconsin with it as a destination and for the opportunity to get away to the country and, hopefully, run into a few antique/vintage stores along the way. I booked a 2-hour tour of the house and school, opened by Wright's spinster aunts who instituted a school in the original building found on the land, which was to become Taliesin and later Wright's own school of architecture and eventual home. 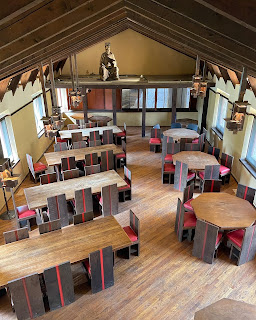 The tour began in the school. Apparently, students came to board at it from as far away as Chicago, which is, nowadays, a three hour drive. When the sisters closed the school after 30 years, Wright tore down the original building and built up the existing buildings. I was immediately taken by the beautiful stone used, a local quarry supplied the smooth, porous stone used inside and out. I couldn't help but run my hand along it as we climbed the steps into the main building. There, the ghosts of students past were in attendance, and it wasn't hard to imagine the children attending the Hillside Home School or the men that would travel to work with Wright. The wood floors had a life of their own and the creak and groans reverberated. The floors reminded me of the ones that I walked across early in my career at Marshall Field's State Street store before the big renovation that moved out most of the old charm of the storied department store in the early '90's. The floors in the Ukrainian Village vintage apartment that I lived in for 24 years were much the same. At Taliesin, I walked in circles across them, kicking up the dust in celebration of old, creaky wooden floors. 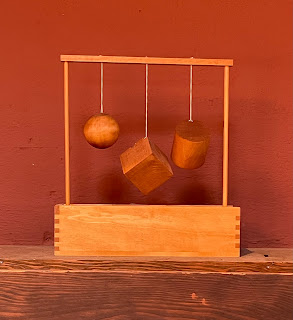 One of the artifacts highlighted by the guide are pictured here. Wright was of the mind that in order to create, one has to play. Our tour guide said that he would give students, like children, the challenge of taking ordinary objects or unlike ones to play with in order to build something new. Interestingly, Jeff Tweedy, of the band Wilco, wrote in his book essentially the same. In writing about songwriting, Tweedy said that most adults have lost their sense of play. And if adults played more, they would create more of whatever they have the need or desire to do. When I was in college, I took a popular general studies class offered- The Fundamentals of Design.  The professor was a known designer, Harold Grosowski, Weird Harold, who designed the shape of Dove soap of all things, and was a peculiar, entertaining teacher. In his class, most assignments centered on  taking ordinary, varied objects to create something new. For one assignment I was given two elements, nails and paper, and was challenged to make a Christmas ornament. I really connected to the class. I didn't have the desire to create objects in the end, but the thinking process appealed to me as it allowed me to entertain different ideas and consider how together they could be the genesis of another idea altogether. 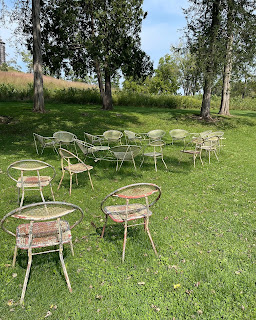 As we walked outside to the beautiful grounds, I captured the picture of the outdoor chairs scattered under the shade of trees and had a strong sense of my own college campus, which sprawled across an equally green landscape. My campus had been a hippy haven in its day, which I could imagine as I wandered across the naturalscaped lawns and through dusty buildings. The Taliesin School of Architecture began in the 1930's well before the time that I attended college, but the sense of it was overwhelming for me. I transcended to a space and time where the possibility of imagining how different things, natural things, could come together to create something new was possible. The ghosts of the place have free reign in that Wisconsin river valley, and they've stories to tell.

I won't go through each detail of the house. As I have established, I'm not necessarily a fan of Wright's plans. The house itself was one always in progress with the first two having burnt down and the third, never quite completed. I appreciate Wright's idea that a building should become a part of the landscape, not the tower over it. The wide windows allowed for breathtaking views, but the compressed hallways were claustrophobic. I fully understand how his third wife insisted on buying comfortable chairs at Marshall Fields in Chicago as anything that Wright made was hard and unforgiving. But I'm glad that I took the jaunt up to see it for myself, for I determined that it is not thing itself that is the beauty of it; rather, the ideas and inspiration that were the founding of it.