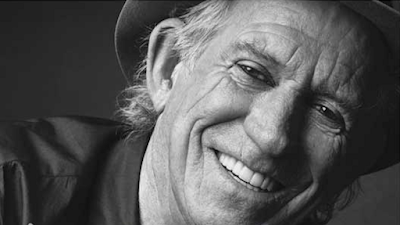 Four things, aside from his wicked guitar playing and chain smoking, stood out most to me in Netflix's documentary of Keith Richards "Under the Influence." His laugh and easy smile, and his old man hands.

The laugh and the smile is one with the other. The man is amused. He smiles about the past, giggles after a riff, and the lines on his face deepen in front of our eyes for it. He's a magician with that ability to find joy in everything that he's experienced. On the other side of the learning curve, he's found grace.

Process is so much more interesting to me than end product. And in this documentary, we are allowed a glimpse of the music and friendships that have made the man. This is not a Rolling Stone retrospective. Mick, Ronnie, Charlie, and the others are there in a peripheral vision, but this is Ketith's gig. Oh sure, the one isn't as remarkable as the whole, and you may think that it's time to get up to get another beer or go to the bathroom like you'd do during a Stones concert when Keith sings his little ditty, but don't. This song you've gotten listen to.

It's hard to talk about "Under the Influence" and not tell to much. I'll leave it to this. It is worth the time to wait on a friend to tell it for you.
Posted by miss moran at 11:45:00 AM