Five years ago, I saw Florence and the Machine for the first time and was blown away by her voice and presence.  A friend and I did a tour of the Great Lakes area-ish Midwest at the beginning of our summer break. We drove through 'antique alley' in central Indiana, moved up through Ohio and up to Frankenmuth, Michigan to visit the 'largest Christmas store in the world:' Bronner's. Before becoming teachers we both worked at Marshall Field's where Christmas, particularly at the time that we worked there, was magical ... at least it was for me. And both of us had strong ties to Christmas past, so we headed off to tinsel town. En route, we heard on the radio that U2 tickets were still available for that day's show at Michigan State University. My friend said, 'do you want to go?' Did I want to go? That's like asking a kid if they want some candy. Please. We pulled over to a Starbucks for some WIFI and sure enough, we found tickets. And not just any tickets ... we scored general admission tickets, which are the best ones to get because you can get right up to the stage to get a look at the band and they are the least expensive. 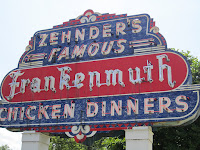 We had some time before we had to drive to East Lansing, so we took our time at Bronner's, the Christmas wonderland. The store was full of a lot of ... things that I wouldn't buy. I was, however, amazed at their displays of Santa Clauses. I love Santa ... and there, I found my pick. When my niece was young, she told me that I should marry Santa Claus because when he dies ... I get all of the toys. And seeing all of the sexy Santas like the one pictured, I thought that maybe her idea wasn't such a bad one after all. Frankenmuth was a sweet, touristy town. One of the specialties at the restaurants was the fried chicken dinner. Of course, we had to indulge. We were sat at a table for two in a cheery room and what was delivered to us was more than any two people could eat in a couple of days, let alone an afternoon luncheon. But it was good ... and we gave it a girls scout try to clean our plates.

When we arrived in East Lansing, it was nearly time for the show to start. We pulled right in to the parking lot at the front of the stadium. We took turns changing into jeans in the back of the car and headed in. I had never been on the campus of Michigan State. Walking right out onto the football field was amazing. It is a huge stadium compared to the one at my college, and this was before I had visited another friend and attended an LSU game ... which was even bigger. It wasn't until this point that I realized that I was going to an unscheduled U2 concert ... brilliant ....and it would be the first concert that I had ever attended without one beer or mai tai or something as college football stadiums do not sell alcohol ... imagine that? We pushed through the crowd towards the front. The sun was just beginning to set when the opening act came on ... Florence and the Machine. I had heard some of their music on the radio, but that was the extent of my exposure. I was in for a treat. Florence cast her spell on me. She floated in her silk chiffon and bare feet across the stage and in circles singing like an angel. She has been someone for me to watch since that time.
I would be remiss if I didn't also report that U2 was awesome. I can never get enough of my boys ... and on this warm summer night in Michigan on an evening I didn't expect to see them, I was that much more excited. And look, I picked a picture that I took of Larry and the Edge, not Bono. Yes, I understand that he's not the only one in the band. What a great day ... Michigan, chicken, Christmas, an angel, and Bono.
Posted by miss moran at 8:00:00 PM