Kate Moss is my favorite super model. She is just so damn cool. And she can take a photograph that is for sure. Sometimes, in photographs that are taken of her on the street, she looks quite ordinary. But give her an editorial and those cheeks come out and her mouth settles into the smoothest pout that I've ever seen. For this spread, she styled herself in some of the Rolling Stones' costume/tour collection on exhibit at the Saatchi Gallery (http://www.stonesexhibitionism.com/exhibition/) in London, April to September 2016.

Bella Freud wrote the accompanying article to the photos. She has had a long history of loving the Rolling Stones and actually knowing them as well according to the piece. Her husband, James Fox, co-authored Keith Richard's autobiography, "Life." It's pretty much a love-fest in her admiration of the boys and their look .... er, sex. Freud writes: "Mick and Keith, though weren't like anybody else. They were both shocking in different ways. Mick was almost like Nureyev; he present himself in such an unapologetic and confrontational way. All the things one might try to disguise, he flaunted. Instead of wearing baggy things over his incredibly narrow, tiny hips he wore the tightest clothes, so all you could really look at was his cock. You didn't have to look at his cock, but you had to look at his cock. So much for it not being polite to stare - you couldn't take your eyes off him, and his body language directed you where to look." 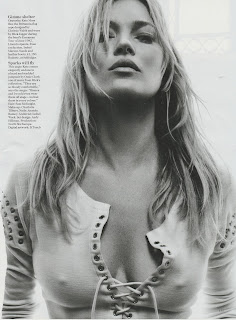 Mick is like Nureyev when he is still, thin ... moody ... chiseled cheeks, but when is he ever that? The man just moves. I love too how Freud, the great granddaughter of Sigmund, liberally uses the word, 'cock.' It must be an English thing because I don't hear as many Americans use it as often. My ears picked up to it on David Bowie's "Blackstar" in the song, "Tis a Pity She Was a Whore." He sings, "Black struck the kiss, she kept my cock." What a fabulous line! And all I can think of when I am listening to it is that he was dying and he was thinking about his dick. Yeah, that's more American ... 'dick.' I love it. Bowie also was said to have as I have mentioned in this blog previously, a pendulous penis. It must be a qualification of the superstar, rockstar: must have a big cock.

What's amazing is to consider how tiny Mick Jagger must be in real life because Kate Moss is wearing his clothes. And the Stones costume manager has reportedly said that the boys only ever grew an inch in the waist from the late '60's to now. So, she also has 'narrow, tiny hips,' and a big cock, apparently. But Moss was never known for having a body. She was the first in a trend of waifs that floated in on the heels of more buxom beauties like Naomi Campbell and Cindy Crawford. I appreciated them for that; however, hands down, Kate Moss has it over them for cool. She is definitely a four letter word that begins with an hard 'C.'