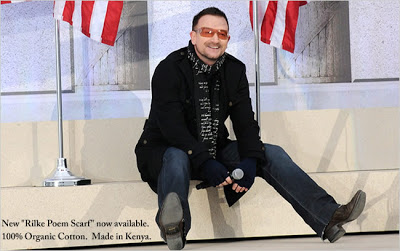 On Monday, I was sending out a text to a friend to wish them a happy Dr. King day. I linked in a video of U2 singing at President Obama's inauguration concert in 2009 when he first took office. The President invited Bono and the boys because they are great ... no really, the campaign had featured U2's music prominently. Naturally, U2 performed on the steps of the Lincoln Memorial "Pride, In the Name of Love," which commemorates Dr. King's legacy.

When Obama won and the inauguration was being planned, HBO announced that they would televise every moment of the momentous occasion of America's first black president being elected into office. And for this, HBO extended a temporary membership to cable subscribers so that subscribers everyone would have the  opportunity to follow the events of the days that surrounded the big event. I signed up immediately because I didn't want to miss any part of the celebration, and that U2 was performing made it even more enticing.

Re-watching the performance this week, I became so aware of my feelings about the 2016 election and my reaction to it. Watching Bono bound out child-like (or geeky teenager) excitement across the marble steps leading to the Lincoln Memorial, I remembered how optimistic I felt about the country at that time, the President, and the change that would come with his promise. In this shot, Bono sits on the stairs after the performance and looks ready for the possibility of it all. It was an amazing time for everything that Obama said that we needed to call on: hope, change, and the ability to make it happen. Yes, we can. Yes, we did. The first months of the presidency were tricky. The leftovers from the previous administration would seem to be the sledge hammer that would fall on hope and change, but it never did. For eight years, through times that moved in a pattern of up and down as all time does, possibility was never lost.

I have no interest in the Inauguration today. I don't want to listen to President Trump mumble through mesh ideas that aren't fundamentally American. I live next to the state that Mike Pence ran with intolerance and weak ideologies. Come live in Indiana, we have a balanced budget reads the billboards out to my mom's house on the border. No, that's all right. I would rather live in my broke-ass, broken down mess of state than move somewhere that allows for a business man to refuse to make a cake for a gay couple's wedding. In Bono's words, "I want to close my eyes and make it go away." It won't. But I am not so sure about how much of this sideshow that I can actually take. There will be no HBO for me this time around.

But I will not give up hope. I made a promise 8 years ago which was to say that I can. So, I will. And if we all will ourselves to move forward in grace and with hope, we can't lose. We just can't.
Posted by miss moran at 2:10:00 PM