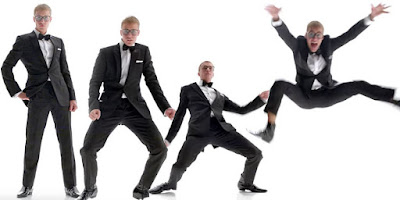 Super Bowl commercials aren't the tah-dah that they used to be because so many of them are released before the actual event. Most everything anymore is spoiled by our frantic need to know about everything before it happens. The element of surprise has been eliminated from our collective consciousness.

Ah, but then Justin Bieber showed up  on a T-Mobile commercial, and I was surprised by his adorableness. Actually, I was not that surprised by his being adorable because he is regularly. But I didn't know that he was going to be a Super Bowl commercial. That was my surprise for the game (come on, you didn't think that Tom Brady wasn't going to win? He's too practiced, too steely, and he knows how to win. It was inevitable).

I was talking to a guy at work who had asked what a particular student thought to talk to me about when I told him that he was asking me if I liked Justin Bieber. Now this student was more like a guy that would ask me if I liked Chief Keef, and he may have been trying to get my goat, but I always respond to silliness as if the query was for real. It always throws 'em off ... oh, it surprises them. My colleague told me that he didn't think much of Bieber until he saw him on Comedy Central being roasted. He said that he liked that Bieber was a good sport about all of the ribbing and actually was quite self-deprecating. I was not always a Belieber, and it took "Car Pool Karoake" for me to realize that he is endearing. He doesn't take himself  seriously, and he's fun. I did a turnaround. And this spot, if you haven't seen it check it out on YouTube, is all of the evidence that you need. It might just surprise you.