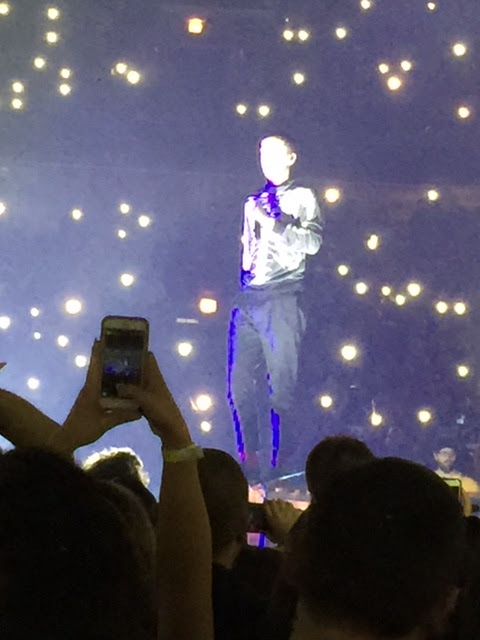 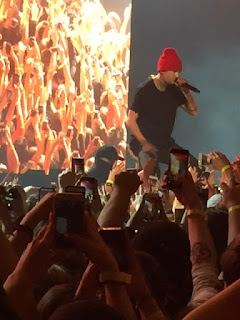 I wore a David Bowie t-shirt to the Twenty One Pilots concert this past weekend. They are my nephew's favorite band, and he convinced his mother to bring him up from the island to see them for his 16th birthday, which falls on Christmas day. He sort of always gets short changed as much as we try to make the evening of his birthday special, so I guess that this was a big make-up for that fact. My sister, his mother, told me that no one would appreciate the Bowie ... hah! I told her that this band wouldn't be if it hadn't been for him, and as you can see from the top photograph... a new Star-man is in the house ... Mr. Tyler Joseph. And my t-shirt? It was noticed. These kids, the fans who call themselves the skeleton clique, are not totally unaware of what has come before. And Twenty One Pilots in a very short time have demonstrated their grit in crossing, pulling, and dragging cross cultural genres of sound of innovation. I can't think of any one else who is doing what they are doing ... except those that are now imitating it. 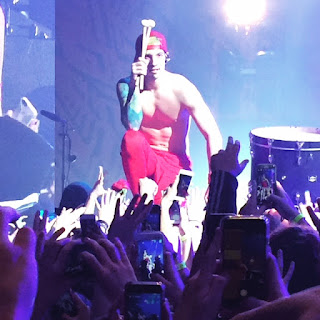 The show put on by Tyler and his band-mate, Josh Dun, was buoyant and penetrating. They demand of their audience movement, and through the two and half hours of the show everyone was in sync with the maestro- Tyler. Josh drives it with his pounding beats ... pretty close to him at one point in the evening, I could see how every muscle in his shoulders, arms and chest work to make gorilla sized sound from his kit. I wouldn't have believed it if I had been there to see it pulled out into the crowd while he drummed us senseless. But Tyler is the star man. He it at ease with his crowd, which pulled young to old who were happy to jump up and down, wave arms in the air, and yeah, yeah, yeah at command.

One of the highlights of the show was when the boys pulled their opening acts, Judah & the Lion and Jon Bellion, out on stage to perform a couple of cover songs: Tubthumping (Chumbawamba), No Diggity (Blackstreet), Where is the Love (Black Eyed Peas), and Jump Around (House of Pain). Both acts were great on their own, but all together, it was joyous. What better tonic for the times we now live that raucous, mashed up hootenanny?!

And the best, best part of it? My nephew got to see his favorite band live.  And he was happy to share it with his mom and two aunts. That is what it is all about. My dad gave me the line to soothe all sorts of aches and pains with the world of music, so it makes sense that I pass that same key to existence to the next generation.
Posted by miss moran at 3:14:00 PM