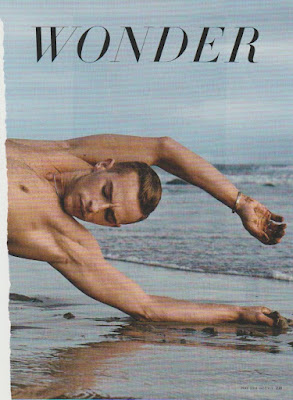 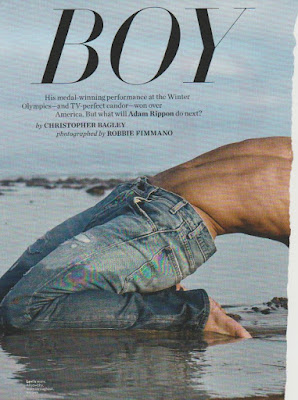 It was difficult squeezing Mr. Adam onto this blog page. I had wanted to present it in the same manner as the magazine centerfold that he is in this month's InStyle magazine, but technology prohibited me ... or rather, my inexpertise at manipulating pictures on this platform. As I look at what I've settle on, I like it. I see 'wonder' as Adam stretches out from the page; and boy, his torso as it bends back is stunning- nearly Nureyev-like.

Lately, I have had an ongoing conversation, mostly with myself, that in my profession, teaching, the practice of it could be rated, or scored, similarly to ice skating. I started to think of this while I watched this year's Olympics and the explosion of Adam Rippon across the ice. He is not considered, technically, the best skater. The American, Nathan Chen, performed 6 quads (quadruple jumps, which is 4 full rotations in one jump) in his final skate. He did not win the gold medal as he performed poorly in his short program, but the 6 quads were athletically and technically, amazing. His artistry ... well, I found him to be stiff and robotic in the part of the program that makes skating elegant, beautiful, and emotional.

Adam's programs, the long and the short, were some of the best skating at the Olympics that I've seen. He is so beautiful as he moves across the ice. His performance was dramatic and compelling. Ah, but he didn't attempt any quads ... he didn't even plan to do a quad. He landed all of this triples, but that put him behind the leaders; even though, a few of them fell in their skates.

So I got to thinking about that and what I do. I work with a woman, who like Chen, can land the quads. Technically, she is perfect- planned, scoped, sequenced. But the artistry? I wouldn't want to be a student in her classroom. Her execution is stiff, robotic, and flat. I'd rather be a Adam than a Chen. I want to be captivating, fluid, and showing my students that I love what I do! Technically, I'm solid, and I'll land all the triples in the world, but their 'ease' will not jeopardize the effectiveness of the artistic presentation.
Posted by miss moran at 11:46:00 PM