If I were a rich girl ... I think that I would dress in Dolce & Gabbana exclusively. So many times when I'm dressing for a mood, the above, pictured in the ad, is my target. I love the Italian aesthetic. Classic black, managed messy hair, red lips, oh, and a cross. How beautiful. So full of life. So serious. The Italian woman is all: virgin, mother, whore. Certainly it isn't only the Italians that wrestle with those expectations; one can find evidence of the trichotomy in any Catholic culture, but it is the Italians, who portray it most convincingly.

Not long ago, I rented an Italian movie. The Italians don't make the best movies ...  but what I love about them is that they, more than anyone, love their women and treat them all beautifully. Although the ad above shows only the young woman, in many of the Dolce & Gabbana advertisements, all ages of women wear the clothes. Italians do not seem to have the same hang-up as certainly Americans do for age, size, wrinkles! In the movie, the lead actress was far from being the ingenue. She was a woman of a certain age that wrestled with the same issues and complaints. I couldn't keep my eyes off of her throughout the film. She had a way, effortless, sort of off-kilter, but put together at the same time. Her clothes were just tight, and her shirt barely contained her bosom. But she didn't look slutty. No, she looked ripe. And who doesn't like a piece of fruit that is right at its most delicious stage. 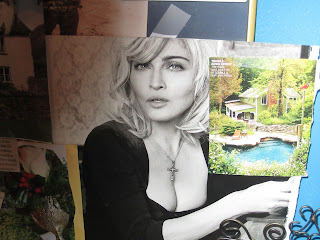 Of course the Material Girl does Dolce & Gabbana wonderfully. She has done their ads for a couple of years, last year most notable. I have a picture on my vision board in front of me. She is not laced, but she is in the requisite black and in the determined fit ... the garment is not the focus, it is rather the support for the force of which is this woman wearing it.

Yes, these are perfect clothes for making spaghetti, yelling at a man, and then making him feel like he is the only man in the world who can make her purr.


Of course I would be remiss if I didn't have something to say of Italian men! Oi! The last time that I was in Italy, I was on a mission to find a plastic Virgin Mary bottle like the one my Irish friend carries around with her from country to country. Her's is from Lourdes ... filled to the brim with holy water, it protects her in all of her travels. I wanted that same protection. While at St. Peter's Basilica, I found one in the gift shop. It was not filled with Holy Water, so I took it out to the church, and submerged it in a Holy Water font. Well, apparently that's not permissible, and two handsome men whisked me away to the back. I was worried that I was being separated from my mother, who was travelling with me, but their rush was intoxicating. One asked me in perfect English, 'what are you doing?' I explained that I was only trying to fill my Virgin Mary with Holy Water to take home with me. Oh my goodness, they were so handsome, gorgeously suited, and smelled like men should smell. Oh dear. Arrest me if you are to be my jailers! But instead, one took my statue to the back and filled it ... probably with tap water is my guess. And then too soon, they returned me to the nave.

Maybe it was later that day, or another ... Roman days blend. We were on our afternoon gelato break sitting on the lip of a fountain in a square full of artists. The scene was very pleasant. Soon, a gentleman started to talk to me. He was an artist on the square. Soon, after realizing that I was not in the market to buy a painting, he started to try to buy me. He moved closer and closer. And his kisses, oh yes he kissed me at hello, moved from my hand, to my cheek, to .... 'hey, you're getting kind of fresh with my daughter,' my mother said. To wit, he responded, 'so what am I to do, take my kisses away?' And he moved backwards across my landscape taking back his kisses. In conversation, he realized that he had a friend who lived in my city, and perhaps he should visit. Hmmmm ... he was a hairy beast. Big bushy beard and head of hair. He was ruggedly built and quite the contrast to the men I had met earlier. Soon, my new friend, Georgio, was building our life together. He said, quite sincerely, that he was, '95% certain that he could make me happy for the rest of my life.' Our gelato finished and the conversation getting too ... crowded, we moved along. Several times we ran across the square in our wanders through the city, but chose to by-pass it.

I'm wondering if I didn't make a mistake that day. No one since has said that he was 95% certain that he could make me happy for the rest of my life. From this I learn, don't just wear the dress, live la dolce vita. Oh how I try!