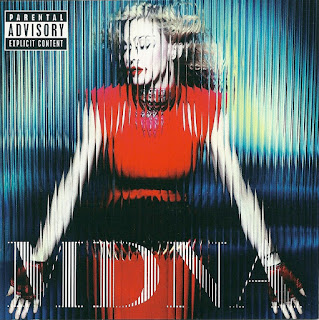 I love initials. I call several people close to me by their initials. Madonna is brilliant at tagging herself. From Material Girl to Madge to MDNA. I have done it in my own way ... missmoran is, I suppose, my own tag. I should trademark it. Make it official. I would then have one piece of paper that makes something in my life 'official,' aside from my birth certificate, and, oh, my expired passport. Better do something about that.

I was ready to buy MDNA, the last Wilco record was getting over-played in Bridget (my car). I needed a new record obsession. I thought that the record was released on the 26th. A week before the wall in my neighborhood that is always covered with album release posters, MDNA was posted and it read MARCH 26. HA! Flying to a Target after work I was told by a khaki'd boy that I was wrong. I tried to convince him to give me the album a day earlier, but that didn't work. I didn't try really hard, maybe if I had, I would have gone away with one. But to wait is in itself tantalizing, and wonder if it sucked? And I didn't want to over-listen to it? One more day.

The 27th, I was ripping the plastic off in the check out line so that I could slip it in as soon as I got to the car. Do I need a bag? No, I don't need a bag! I just need to play this. And play it I did.

First listens are always difficult. There's so much more to it than just the music. There's expectation. History. Anticipation. Worry. Yeah, it's not going to be great on the first listen ... well, except for U2's No Line On The Horizon. As soon as that first song played, I was in. But that is another artist, another story. On first listen ... I thought, oh Madonna! Then I talked to someone who said, oh really, what did you expect. I shouldn't have called. I took a nap.

I woke up and thought, I wonder if there are any videos for MDNA, aside from the cheerleader one, and I found it on YouTube. It's for the first song of the album, Girls Gone Wild. And here I found the entry into this work. That girl can make a HOT video. I've had to watch it over and over and over ... and then again. It's beautifully filmed in black and white. Madonna begins with her prayer ... the most recurrent theme in her work, how can I balance being good when what I want is to be bad. Of course the bad is relative. Her bad is typically erotic. And how can that be bad? Oh right, she's a girl. No one wants to play Samantha in The Sex in the City game ... everyone wants to be Carrie, who manages to balance being thoughtful and sexual.  Samantha is a man sexually, and we know too well that we will not be successful striving for equality by acting like that. That's why no one wants to be Miranda either. She dresses like a man to be powerful. I don't even ever remember her name, and I had to look it up for this post ... that's a testament somehow.

Madonna has always pushed her sexual agenda on to the masses. From the first, whether rolling around the stage of the MTV Video awards as the virginal bride (1984), to the groom french kissing Britney Spears playing the virginal bride on the MTV Video awards (2010) decades later. I bought her Sex book. It's still somewhere around. I have the Erotica video on a shelf. I'm not always sure that she figured out how to do it ... right. It got a little too in your face, and then it was exaggerated. It went from good clean fun to soft porn. I suppose it was a conversation and she definitely opened up the opportunity for women, to own their sexuality, not a man's or girl's, but one's own.

Girls Gone Wild. The prayer. Good vs. bad. In her box, she seems like a fly on the wall,  similar to Coppola's Dracula. Bug-like climbing the walls. Strong. Physical. But as the fly suggests, a voyeur. A voyeur of beautiful men who are tantalizing and show just enough to imagine what it would be like to ... bite the apple they hold. The smoking gun image is interesting ... an ode to Guy Ritchie perhaps. He does direct the Sherlock Holmes movies (and those other English gangsta movies with guns in the titles), and smoking guns figure prominently in those stories. The gun has fired, and there is proof of it at any rate. Something has happened. Criminal? For some, a woman having a good time is that, but Madonna is pulling this trigger. She shows no remorse for having a good time. Naughty girl. Another fabulousness of the video, let's face it, is that Madonna knows some fancy clothes. She is beautifully outfitted. She counts on style, not absurdities to tell her story, and I appreciate that about her. Project Runway may begin with a few challenges of how to dress a model from the grocery store, but it always ends with a runway show at Bryant Park and couture. In the end, I don't need Madonna's band of boys to arrange artfully around myself as I consider the possibilities, but I do feel that I can own it, which makes that powerful for me in my story.

I don't have to go into this record song by song. It's Madonna. I'll hit 4 or 5 tracks hard, and skip others. It makes me want to get up and dance. I can sing along. Do I wince at some of her rhymes? Of course! Does it bother me that I can sing along to the cheerleader song? Yes, in the grocery store I found myself singing somewhat to myself, 'l-u-v Madonna! y-o-u do you wanna?' Why not?! It's not rocket science! It just feels good. And there is something about the power of that woman that is intoxicating. Is she a bubble of blond contradictions and pretenses, surely. But aren't we all just a little? Or want to be?