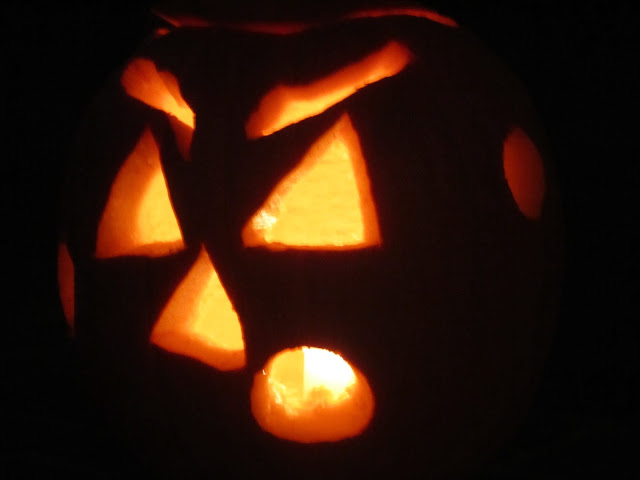 My friend did not like my pumpkin with all of the holes in it, but I love how it glows!

Tonight I celebrate Halloween with friends and family. I always wait until the last moment to put a costume together. I bought my mom a Halloween card that featured the 'ghoul scouts.' She was my scout leader, and I thought to do that ... but I would've had to order a uniform, and that didn't happen. So, I'm just a gurl ghoul.

I titled this entry ghosts because I've been haunted by one for the last year. It all started when a very dear friend died last November. He meant a whole lot to me over the years ... and his loss is still not one that has settled. In the week after his death, I awoke and felt someone in the room. Through a sleepy squint, I could just make out the outline of someone standing in the corner. I wasn't frightened at all. And I thought ... well, Jeffrey is keeping an eye on me. He came a couple of more times and then disappeared.

When I returned from a trip this summer, he was there again. Just for a night. And then along came Halloween! I brought all of the decorations that I have collected over the years up, and put them in their usual places. I have a couple of the pictures that are motion activated ... the old lady as you walk by, changes to a spooky figure and mumbles a few scary words. I put her on an entry table in the hall ... far from windows and drafts. I sat on the couch to watch television, and fell asleep. I was awaken by the lady and her mumble. hmmmmm. What was that? I crawled into bed, and didn't think twice about it.

And then in the night ... she went off again. How strange. I put new batteries in it. Who was walking by that triggered it ... aha! I thought. Jeffrey. I moved the picture. I really didn't want to be awaken in the night by her rambling torments. And then I had friends over last weekend, and they bore witness to the phenomenon. Strange.