Hats should always appear effortless and light, never clumsy or heavy. that's the mystery of the craft, and so much labor goes into creating that illusion. Replicating a flower is the most difficult, because it's truly perfect.

Every time that I see a hat like this, I return to Moorea, a small island 30 minutes by hover-boat from Tahiti. It is nearly uninhabited. And I spent a lovely week there, living in a little cottage, exploring the wilds of the volcanic rock mountains, and the mile long beaches. I happened there, interestingly, after reading an article in Elle magazine. I was waiting in an airport gate for a plane to take me away from my one true love, when he looked over my shoulder (yes, it was pre-09/11) and said, 'where's that?' And when he looked over the article, he said, 'oh, we've got to go there.' And so I arrived in the South Pacific a few months later, moving from island to island on small boats across the big ocean.

Moorea was idyllic. Staying at a BandB in Tahiti for a few nights, the proprietor assisted us in securing reservations at each of the islands that we planned to visit: Moorea, Huahini, Bora Bora, and Raitea. We had no idea what to expect or how to get each when we took off from ORD, but we figured it out. On Moorea, the 'momma' had got our arrival date wrong. And after much confusion and apology, we were placed in a room of someone else's cottage ... just for the night. He was a singer from France who performed every night on the big island. And he had agreed long ago that if someone needed a place to lie their hear, his spare room was available.

On on our first night, we asked if there was a restaurant to go to ... we hadn't seen one, as when we got off of the boat, there wasn't even really a town so much as just a dock. But yes, there was one, along that road and up the path. We found a delightful French restaurant there to have our petite celebration. I had just finished a Master's degree and my companion was insistent that we have a celebratory dinner. And so we did. And then the lights went out. Not to worry, said the maitre 'd. It happens all of the time as he placed candles on our table. Of course, my guy wanted to use his credit card for the splurge and not use up all of our cash. Again the maitre 'd came to the rescue: no problem, come back tomorrow for cafe, we'll take care of it then. 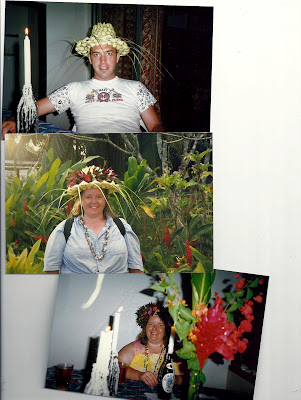 On one of our jaunts across the island, we found bicycles to ride. Along the way, we came across a woman who was selling her floral wreaths and palm hats. He insisted on buying us both hats for our candle lit suppers in the cottage that we eventually landed in. In the middle picture, you can see that I have the pleasure of wearing both. The wreath of flowers was so beautiful. And each night as I sauteed saucisse (French sausages) and we drank wine, we would wear our hats and light candles in the empty Tahitian beer that we would drink at the end of our long days.

One day on the island as we tramped across a wild to reach the volcano, he was bitten by a dog. Yes, I should say that he was shooing them off of me, putting himself between me and their teeth. Unfortunately, one got him. We walked back to the market to find bandages. We asked if rabies was a problem on the island, and an American woman approached us to say that she didn't think so, but she would be glad to take us to the doctor. We climbed in her jeep and away we went. While the doctor looked at him, she explained that she was a black pearl jewelry designer and on her many trips to the south seas to buy the pearls, she met and married a local. As it happened, the animals of the island did not have rabies. The man was fine. Our pearl designer offered to drive us back to the cottage ... for a rest.

Oh, that was a wonderful trip. And the people of each island were friendly in a way that I've never experienced before. They all had such a joy and peace about them. The flower wreath lasted all week. I left it on the table for the next inhabitant. My guy, he took his hat home. And on one of the last great evenings we ever had, he brought it out to wear.

Oh, I love accessories for my crimes.