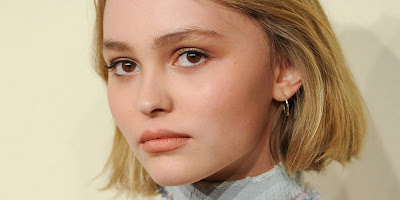 With the pedigree of Johnny Depp and Vanessa Paradis, how could Miss Lily Rose not be beautiful? I will say that I think that she takes after her father's prettiness most. Yes, Johnny hides his beauty behind scraggly scruff and a furrowed brow most of the time, but the man is pretty. Very.

Many years ago, I saw the film, 'La Ville Sur La Pond' or 'Girl on the Bridge' with Vanessa Paradis, Lily Rose's mom. It is brilliant; although the particulars of it have faded through the years, and like many good movies, I am left only with the emotion of it, which for this is despair. The knife thrower encounters the girl on the bridge who is ready to jump, and he saves her life only to put her in harm's way, which is to throw knives at her. She becomes a sideshow attraction. But I also remember the attraction that the two had for each other, and the allure of what it meant to be a target of the daggers. I remember its eroticism.


In this scene (wonderfully accompanied by a Marianne Faithfull song) from YouTube, I argue that it is more ... dangerous ... sexual ... than any red room that has been associated with sex and danger recently even sans Jamie Dornan. With the last dagger, the pain, theirs together, is wholly penetrated, both breathless from the release of its pleasure.

I'm not sure what this young Depp-Paradis will do. She is only 16, but for her party, she did not use 'sweet' as the moniker; rather, she chose sour. Hers certainly has not been a typical coming of age, and the impact of what we know of Johnny and from I have seen of Vanessa, a dark angel she may be. I don't mean in any sort of satanic sense, but in that she will not be full of fluff. Behind her eyes, as the photo above demonstrates, is beguile.