I've not ever seen The Game of Thrones, and it a series that many of my family and friends say that I need to see. It's in its eighth season, perhaps? That's a lot of catching up to do.

Typically, when I run through a magazine, I skip most of the interviews of celebrities that grace the cover. And, for the most part, it is a celebrity and not a model that is on the cover. For this, I did read it for whatever reason I know not. But Clarke lept off of the page and was captivating in an English, charming way- sort of a flibbertigibbet. I quite know what one of those is! 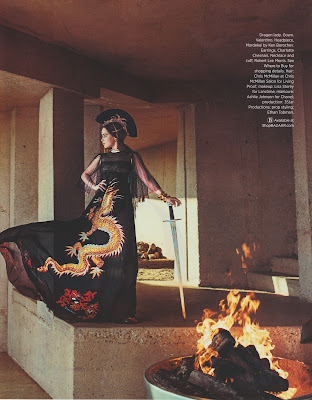 One of the things that I've been told about Game of Thrones is that a lot of breasts are shown. My sister, who is not endowed in this department, commented that she doesn't feel as bad about her deficiency in this area as she's seen so many on the show that she's come to peace with the fact they do come in all shapes and sizes.

In the article, she describes the first seen that she is revealed: "The crew was a few cliffs over, " she continues, "so it's me, four or five extras, and Iain Glen [the loyal-to-a-fault Ser Jorah]. Iain does this thing where he lifts his head and his face goes, 'aahh, naked lady.' But because they were filming so far away, what he said was 'great tits, love.'"

In the picture above, Clarke is wearing Proenza Schouler. You may recognize it as the dress another person of fame has worn lately on the heel of the news that she is pregnant, except in black. I like the red. It's more powerful, and as she is the queen, no? She needs to wear it. One of the other dresses in the editorial is this dragon one from Valentino. It really is quite exquisite, isn't it. That's there's fire in the foreground is brilliant. If she has, indeed, risen from the ashes of a fire with dragons on her shoulders ... we've got it here.