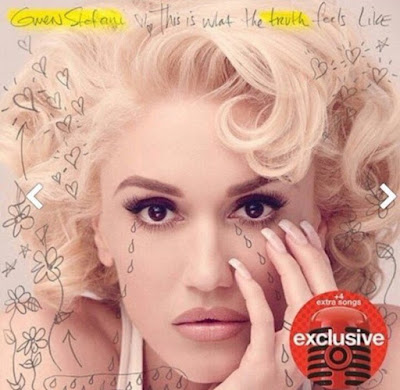 It's hard to believe that Gwen Stefani's Love. Angel. Music. Baby. was released in 2004. Jeez. Now that she's released a follow up solo album 12 years later, I have to consider the years that have passed since then.

I had never bought a No Doubt record, but when "What Are You Waiting For" hit the radio, I had to buy it. Something resonated about it with me ... could be that solo-Gwen sang about being a girl in a boys' world (check), fashion (check check), and fun (check plus). How many times have I thought since  'tic toc, tic toc, take a chance you stupid ho ... what are you waiting for.'

More then than now, a regular Friday feature for me was to drink a bottle of wine, put my headphones on, and dance until I dropped. One Friday night, I called a guy over  that I worked with.  He was a hot headed Columbian who was a certain number of years younger than me. He imagined himself to be quite  .... a latin lover boy, or something like that. I enjoyed his company. His hot head I may have mistaken for passion, but it was a good substitute. He must have been skint to come over on a Friday night, but he did. He even brought over a bottle of wine.

It didn't take too many glasses before I put Gwen on. And I danced. He sat on the couch and watched. I was encouraged by his ... watching. And true to form as he would when we were together, he ripped his shirt off. This was my second favorite time when he ripped his shirt off. The first was when we were eating gyros late at night after having been at a club with his underaged brother and female cousin who wasn't so sure about hanging out with a gringa. They had left when we started to argue about something that seemed really important at the time. Realizing that he wasn't ever going to stop his rant, I decided to leave too. He followed me out on to the street, I jumped into my car, pulled out, and in the rear view mirror I saw him standing in the middle of the street, shirt off and still fussing at me. It was almost ... romantic in a  twisted Dustin Hoffman in "The Graduate" kind of way. And on this night, I danced ... the whole album. He shirtlessly announced several times, the several ways that he would ravage me when I was finished. Oh, he was an entertaining diversion on a lonely old night, but he was hardly a Romeo.

Ah, 12 years later ... I won't get a true test of Gwen's success unless I dance it for someone. The Colombian has long since moved on to ... a western suburb. No one has quite filled his shoes for a 'what are you up to' kind of fun. I"ll have to be on the look-out. Maybe then I'll know what the truth looks like, eh Gwen?!