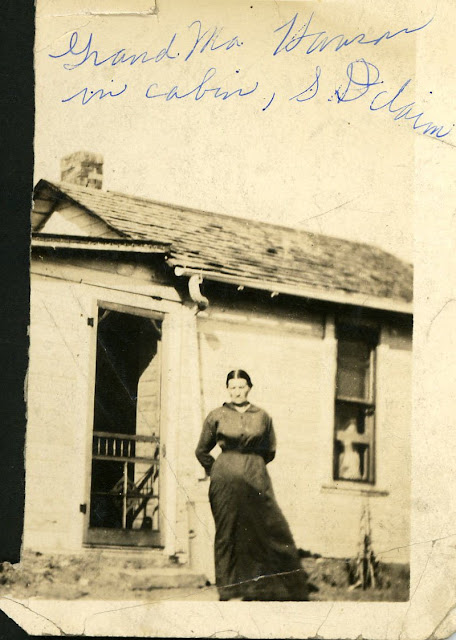 I was going through photographs on my mother's computer looking for one to use as a screen saver because she was tired of the one that had been looking at her for too long. Naturally, I was mesmerized and spent too long going through all of the pictures of our lives that she has stored or others have sent to her and appear, unbeknownst to her I'm sure, in hidden files.

Here is a photograph of my great maternal grandmother who is standing in front of a cabin in South Dakota. In beer'd tales, I tell of this woman who lived in both Iowa and South Dakota. She may be the one that is suspected of having two families: one to mind the business in Iowa and the other who helped her farm her claim further north. It is hard to make out this woman's face to determine if any of hers resides in mine. Of course, my face is taken quite directly from my father's tribe there is no mistaking that fact. But there is something in here in what looks to be a good height and a formidable countenance. I see myself in her. I wonder, for I don't know, what took her from Ireland to this life in what was a pioneering Midwest. My mother speaks very kindly of her, for the woman that she knew as a grandmother in a time that must have been a decade or two or three after this picture was taken. I wonder who even who took the picture? Who would have a camera out in what is the wild to capture a spirit standing in front of what took more work and effort than I think my hands have done in my whole lifetime. 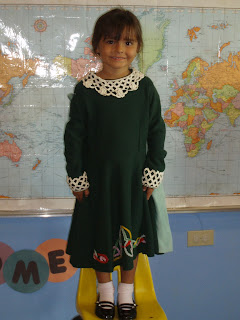 And here is Caroline, my niece, who is 12 this April. She lives in the Caribbean with my sister, her 3 siblings, and Papi. She is a hybrid ... half Puerto Rican, half Irish American. Her little Irish dancing costume was made by a granny in Northern Ireland. I have dear friends there, and mentioned to them that in Puerto Rico, the schools celebrate heritage. All of the little boys and girls wear Spanish conquistador get-ups or flouncy Spanish skirts, and I thought that it would be kind of nice if my nieces could go to school representing their other half. One St. Patrick's Day after Tom and Margaret left the pub, they walked by a charity shop and the Irish dancing costume was in the window. Margaret walked back the next week and bought it for my nieces. Mary Katherine first wore it to school, and here is Caroline. The dress is made of a lovely, dark green woolen with hand stitched crewel work in Celtic designs and beautifully hand worked lace trimming. Can you imagine a wool dress in Puerto Rico? But Caroline looks to be a fine Irish lass. And if I look carefully, I believe that I see a bit of Grandma Hanson in her. Caroline is a force to be reckoned, not unlike the woman who came before her.
Posted by miss moran at 11:00:00 AM