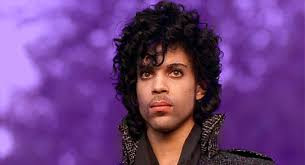 Driving to work this morning, Prince was on the radio ... I jammed out to "1999." And I thought about his purple-ness.
I have been lucky enough to see Prince a couple of times live. He explodes on stage. He is one of the best that seen live. I'm not his biggest fan as in I can't wait until his next record is released, but I keep an eye out for him. Long ago, his second album, 'Prince,' blew me away. He wasn't rock, he wasn't soul ... he was sexy, fun, and liberating. My favorite songs are 'I wanna be your lover,' and 'Sexy Dancer.' Just thinking about them mow makes me want to pop my earphones on and dance. I once read an article about a party in Paris that Prince showed up to. And in the very late hours, he took to the dance floor and tore it up. I would have loved to see that, and I would be up to the challenge to dance with him ... I can just imagine that little bundle of hotness turning it up to 'Sexy Dancer' ... with me.

But Prince is inconsistent. Some of his music falls flat. Even some of his big hits like 'Raspberry Beret,' I have to wonder at what it was in his mind that made him go to ... a song a fruity hat. Bono, of U2, once said that what Prince needs is a band ... to say no to him. And I thought that was a pretty smart thing to say. I can't imagine anyone saying 'no' to Prince. But what he doesn't realize, in my estimation, is that I have a 'no' in me. And I haven't bought anything from him since ... maybe 'Purple Rain.'

And so I wonder about the purple. And I thought of Yeats. In his world, purple is transcendence.

In the line from "The Lake Isle of Innisfree": "There midnight's all a glimmer, and noon a purple glow," Yeats finds, in a natural place, an inverted midnight and noon in a what becomes a transcendence of time. It is sunny at midnight and dark at noon. I wonder if Prince knows this poem, or the interest of Irish poets, writers, and thinkers of the time of transcendence. Yeats would return to the beauty of a pastoral Ireland to find it, and I imagine that Prince returns to Paisley Park in Minneapolis for his own departure from reality. His signature color suggests that he has it in him to be more that what he produces. I'd like to get a hold of him to have a chat. Oh sure, he would have a lot to say to me, but maybe I could be the murmur that would pull out more of what first captured me in the first place.


The Lake Isle of Innisfree