Helena Morrisey was featured in the March edition of Tatler magazine.  The sub-headline reads: "When Helena Morrissey is not managing £48 billion or changing the world, she is raising nine children, with a little help from her Buddhist-monk husband."

I was going to zip past the article because 'we are women hear us roar with out big jobs, Alexander McQueen dresses, and have it all lifestyle' stories are dull and not very reliable. I'd rather read about a struggle. Or a process. Not ... I have it all, and there are only 10 of them in the world that does.

But something else caught my attention. Another headline was a quote from the superstar herself: "I was always like this, the manic Brownie, the one who had all the badges ..." Now that is something that I can relate to.

After reading through the story, I'm still not too sure what it is that she does in managing all of that cash and all of those children, but I was not surprised to learn that her husband 'informs her that she will know she has reached a more highly evolved state when she finally throws away all those Brownie badges she still has, safely stored in an envelope.' Why would she do that? 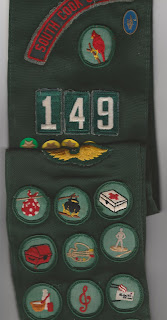 I immediately went to the drawer where my own Girl Scout sash is safely tucked away and in a place that I can immediately go to it. I nearly earned all of the badges while a member of Troop 149. I tackled that Girl Scout book and its challenges with abandon. I learned to plan from those pages. I imagine that I knocked off the easy to accomplish ones first to get them out of the way. Cooking badge? Are you kidding me. Piece of cake. Camping badge? Our troop did that on the regular. And I made my fair share of sit-upons and dunk bags. I see on the Internet that one can purchase a dunk bag ... and probably everything else that we had to MAKE WITH OUR OWN TWO HANDS ... online. More the pity. It was such a sense of accomplishment to build it, use it, and to discover the satisfaction of taking care of oneself. I scanned in the front of my sash here, and it may not surprise you to know that the badges line up the back because once I took care of the business at hand in finding what I already knew how to do, I started to look for badges that were out of my realm of experience. And that's when it really got fun to figure out something new.

I have often thought that I would write a book for grown-up Girl Scouts. The badges, which would be real ones, would be earned by knowing how to put together a dinner party, assembling a tool box for home repairs, knowing what not to wear, ones own top ten books to read ... the list has no limits. And there is so much satisfaction in pulling something together by oneself.

I don't have many relic mementos from the past stored away. But this one is important because the experience of it taught me how to be a girl. I grew up in a time when the ERA Amendment lost, and there was a huge feminist push to make girls equal to boys. I'm not saying that doesn't need to happen because we know that this is still a problem in our society, but what I think got lost in many of those messages is that we had to become equal by being like a boy. And we aren't boys. How we arrive to equal doesn't have to be on the same ladder. Even Morrissey says: 'Women only produce a tenth of the testosterone of men, which means we're kind of a stabiliser ...' Is that accurate? I don't know. I know that the sexes are different, and I believe that we need to study more of how they are in order to fully support our boys and girls as they grow up. Is testosterone a bad thing? Uh, no. Well, estrogen isn't either. Let's figure that out so we optimize the best of both.

Maybe, we should make it a badge.