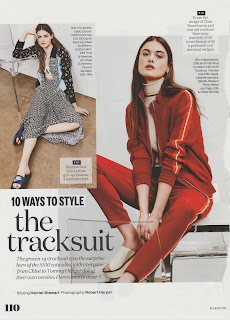 This is the not first time that I have had the pleasure to write about the track suit trend, thank goodness. Track suits are are an inside joke for my sister and I. I always have one that appears in constant rotation, particularly on a Sunday when I am out to visit on Sundays. For a long time a Target brand, Addidas-esque little black number that was black with two white strips was my tradition Sunday supper outfit. The material was something other worldly, and it was not afraid of an agitator, spin cycle, or hot dryer. It didn't pill. Or stretch. Or fade. Just talking about it makes me misty eyed. Those were the track pants that I wore under a wrap dress for a friend's birthday party a couple of years ago. It was right after Christmas, I didn't feel like getting off of the couch or putting clothes on, so I put that together. No one was the wiser. And I received several compliments for the ensemble.

That darling went away, but I've stocked the shelves with perfectly comfortable and equally fashionable items in its place. When I saw this lay-out, and all of the spring magazines have shown the same trend, I decided that I would take my track suit out and to work. I have a pair of Calvin Klein 'sporty' pants that I had worn with a sequined jacket and heels to a 70's disco party. It worked then, so I thought that I'd take it down a notch and make it work for school. I wore the pants, a basic black tank, and a suit jacket. I paired the outfit with a pair of booties. As my father would say, I was looking good.

Did anyone notice that I was wearing track pants with a jacket and booties? Not until the end of the day. And I shouldn't have been surprised who noticed it. I work with an attractive guy- tall, superman shoulders. He is someone who when he is into something, he is in it all of the way. He talks like it, walks like it, and dresses like it. Currently, he is in a lumber-jack phase. He is fishing, hunting, gutting, camping, and wearing flannels, pocketed pants, and long underwear. I actually appreciate this about him. He is a method actor in his own life. And he understands how the outfit can make the man. On the day of my track suit outfit, I had a chance to go up to his office. I was chatting with him and another colleague when he said to me, 'digging the look, Carol.' Goal! And score! I was so satisfied to have some other than myself notice the effort that I took to make a look.

I have had to get to work at 6:15 a.m. for the sport that I coach, which makes dressing in the morning something that I don't have much time for. But now that the season is over, I think that I need to try out more of the trends with what I have in the closet. It makes work that much more fun.