Netflix is showing a film about the birth of CBGB's club in NYC as the mecca of punk rock music. I was obsessed with CBGB's when I was a kid listening to the bands that started up there, particularly the Ramones, Talking Heads, and Blondie. In the summer after my 6th grade year in school, I hung out with older girls a couple of doors down. They were my true entre into the world of music. They had a good turn table, and we spent the hot summer jamming to Led Zepplin, Foghat, Deep Purple, the Beatles, and the Ramones. The younger of the two sisters talked a lot about going to O'Banions, Chicago's punk rock club, to dance. I couldn't wait until I was old enough to go. Naturally, we dreamed of going to NYC and CBGB's. I got the old soon enough, but by that time, O'Banions and CBGB's were closed. Of course, I did have Exit and the Smart Bar in Chicago, which were an equally viable options to wear black and punk-out in a dark, whole of a place.

The CBGB movie wasn't very good, but the music was amazing. Instead of hiring actors to portray and live band karaoke the bands that played there, producers used the original music and the actors lip synced. Hearing the Ramones reminded me of how much that I love them. They jump in, hammer it, and stop. Fast. The stop always begs for another hit.  And always leaves the heart beating. 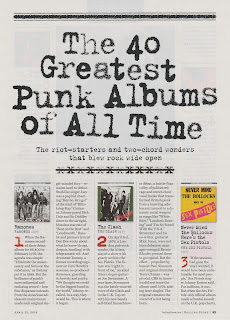 I have never read the story of the Ramones as it is told in this edition of Rolling Stone.  I naively thought that they were all brothers, not understanding that they assumed the name once they became part of the band. I also didn't realize that they never hit it big. To me, they were larger than life.

'Rolling Stone' also listed 'The 40 greatest Punk Albums of All Time.' I bought the top three in vinyl during the time that they were released: The Ramones, The Clash, and the Sex Pistols. I just played the Sex Pistols for my high school, inner city school, students. I have shared with them the new Bowie work and told them the story about how Bowie was first asked to write lyrics to the tune of the song that would become 'My Way,' which would become Sinatra's signature. They asked to hear it, so I played it. And then I remembered that Sid Vicious had done of version of the song on French television show when he was on a break with the Pistols, so I played them that. Blown away by what is that? I moved right to 'God Save the Queen.'

The effect of punk was not lost on them. Everyone needs a jump, a hammer, and heart pumping stop to really feel it once in a while.
Posted by miss moran at 9:21:00 AM