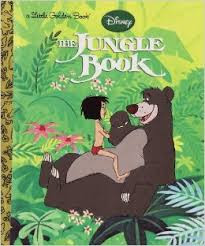 "The Jungle Book" is one of the most worn children's books in our family's collection. It has stood the test time through our reading of it, my brother and sisters and I, and my nieces and nephews.

The original movie was the first one that my Dad took us to when we were young. It was a big deal that he took us out to the movies. It wasn't that he didn't want to take us or that he wasn't interested in spending time with his children, but he and my Mom probably didn't have the money for such a luxury, and, while growing up, my Dad worked six days a week. On Sundays, he rested. Actually, he drank Hamms, then Old Style, beer and watched football or car racing or golf on t.v. Who could blame him? When I consider the number of hours per week that he worked, I wonder how he got out of bed at all on Sundays to do anything.

I have no idea why he decided that "The Jungle Book" was the movie to take us to see. Although it was a favorite, we were kids that read, and we had a lot of favorites that were probably made into movies. I suppose that the time/space continuum was aligned, and this is the one that worked. Although I didn't see many movies as a little kid, I knew that with the few that I did see, especially in the movie theater, that I loved them. As soon as the lights dimmed, I could move from my small space to the world's vast regions of unknown. And it was a lovely place to visit for the two hours that the film flickered.

Yesterday, I went to see the new "Jungle Book." I don't typically run out to see Disney movies. I enjoy them alright, but I usually see them when my nieces and nephews are in town. Disney is all the better with a child on one's lap. But this one, I really wanted to see because it was the one that my Dad took me to when I was young. This time around, my sister and I took my Mom. She's recently had surgery and a complicated recovery. We were to travel to Puerto Rico during my spring break to visit my sister and her family; instead, we are having a steady as she goes outings close to home. What better way to get well than to see a beloved story re-told on the big screen? And it was fantastic! It honored the original movie that I loved so well, but recreated it with a life all of its own. The little boy who plays Mowgli is adorable. He's a natural actor and brings the cartoon'd version of Mowgli to life. My favorite character is the bear, maybe because that big old bear kind of reminds me of my Dad. Oh, he could holler, but there was absolutely no bark in it, and he was a gentle soul.  And it is made the more so with Bill Murray playing the part. The animals and jungle were, as I told my niece, super cool. Jon Favreau, the director, said that a lot of creativity went into the making of the movie as he introduced it, and I would have have put a huge exclamation point behind that statement. I don't really need to know how he did it, as I'm sure it's complicated. All I know is that is amazingly realistic ... well, if real are animals that talk and take on human expression.

"The bear-necessities, the simple bear necessities, forget about your worries or your strife ..." I guess that you don't really need any better expectation than that. And this trip back in time and forward into the future at the same time did for me.
Posted by miss moran at 8:09:00 AM