Wouldn't you love a piece of one of these pretty cakes? I certainly would. I would like to see a pink one in the bunch as they look rather blue without a rosy companion. Surprisingly, these lovelies may be purchased, from williams-sonoma.com, for a mere $60. That's not too dear if you consider what a normal layer cake from Whole Foods costs.

I like to bake cakes. I have a trophy on top of my refrigerator for winning a high school cake baking contest. For that, I chose a recipe from my mother's cookbook, probably Betty Crocker's, called a Nutcracker Suite Torte. It sounded festive, and one of the ingredients was rum flavoring. As the judges were teachers, I thought that they would appreciate the run flavoring in the middle of the day. I was right ... I won. 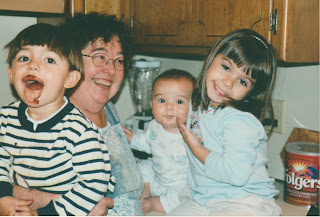 My mother was always one to encourage us to cook. I think that I made my first solo batch of chocolate chip cookies when I was in 2nd grade. And the tradition has held with my nieces and nephews who have been sitting on grandma's counter since they could ... well sit up. It was not unusual to have a 2 or 3 year old crack an egg into the mixture. Now, the kids fly solo, and we are given to challenging them with their culinary, particularly baking, skills. On a recent visit, my 17 year old nephew raised bread and made the dinner rolls. And at Christmas, my 11 year old niece happily remarked that the best recipes come from grandma's cookbooks. And batter tastes good too as evidenced from the chocolate smiles in the photograph.

I wouldn't dream of replicating the cakes that Oprah has shared with us. I don't have that kind of decorating skills. But i could try to get the taste and texture. The chemistry of it, I've mastered.
Posted by miss moran at 12:29:00 PM