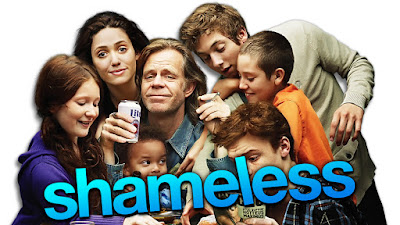 Yes, I am late to the 'Shameless' party, Showtime's better American version of a British hit, which I am surprised about, for the fact that I'm just fine with the good ole U.S. of A's version of it ... English accents be damned! The actors are what makes this show impossible to stop to watching.

Admittedly, the show is absurd. Who lives like this? But there is enough about the truth in some of what is the unimaginable to be able to identify some characterization that I am not wholly unfamiliar with. A drunk Dad? Yeah, I know a little bit about that from the block ... maybe some from my own home. When Frank, the drunk Dad, opens up a can of Old Style, it's hard not to think about my own Father. Of course, mine didn't sit at a bar, pass out in the street, or sell his children's whatever to buy him another drink, drug, or the like. But when Frank rants with a beer in in his paw, I can hear my Dad in him. Frank is a drunk, but he isn't stupid. And he usually rants when he's down something wrong because it reminds him of what should be right, but isn't. My Dad would not rant as often, but he was happy to let you know what he thought about any thing in particular, and he was informed. It went through the Dad-filter, but it wasn't far off of a mark. William H. Macy plays Frank, and he's the best that I've seen him. His character is so disgusting, but he pulls a humanness out of the old boy to make him, possibly, likable. You don't want to like him, but it is hard to resist.

Fiona is another character that I understand coming from a family of four kids and being the eldest girl. I know what that means. Fiona has so much more responsibility than I would have ever had to take on given that she is the parent in the house; nonetheless, there is a charge that comes when one is the oldest girl. When Mom and Dad aren't around, it usually fell to me to take charge. And they complain that I'm bossy now. Umph! They would know what that was if they had been raised in my position.

My favorite character ... probably because I met her at church a couple of Christmas Eves ago, is Sheila, acted by Joan Cusack. Sheila is complicated. And each complication moves across her face effortlessly. She portrays the character as naive, quirky, and lost in a world that she wants to be in but doesn't understand. Plus, she is naughty. On Christmas Eve, our family goes downtown to eat under the tree, see Santa, and go to mass at the big church. Once, in the 'welcome your neighbor' part of the show, a woman turned to me and said, 'hi, my name is Joan.' She didn't have to tell me who she was as I knew the whole time that she was sitting next to me. I can't wait for the day that she's seated next to me again when I can say when she introduces herself, 'okay ... Sheila!' I should look up to see if she's won an Emmy for her role because she certainly deserves it. Maybe, I should mock up an Emmy just in case that she hasn't to present to her at mass. That would be a laugh.