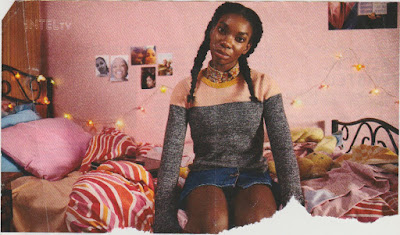 If the series is English, I'm likely to watch it. The comedies that Netflix have been dropping from across the pond are not to be missed. I may be biased, but they're funny as hell and different from the same old week night line ups that the networks pass off every season as fresh.

Tracey, seen sitting on the bed above, is truly fresh. A gale force from across the Atlantic. An evangelical, virgin 24 year old, she is ready for action. The funny thing is that she doesn't know what action looks like, smells like, or nothing. Michaela Coel, the show's creator and star, has created a larger than life character whose exaggerations put a magnifying glass on so many current issues including race, sexism, and religion. And as much as she is so different than me, she seems awfully like me as well. She doesn't know what it is that she's looking for all of the time and for that reason, she doesn't what it is when it is in front of her. It's hysterical and terrifically sane at the same time.