Chin on the fence, the Edge's guitar tech sauntered down the runway in front of me during the transition from opening act to U2's performance. He smiled at me, probably because I was wearing an U2 concert t-shirt from the Zoo TV Tour, and flicked a pick at me. It landed on the ground, out of reach. A security guard walked over to pick it up and playing like he wasn't going to give it up, and the woman standing next to me grabbed it. She turned to her boyfriend, who wasn't paying attention, and said, 'hey, you want this?' I wanted to take her down.  But I am not one for confrontation and I certainly didn't want to get booted for fighting. Security was tight.
I have lost count of the number of times that I have seen U2. I never tire of the energy that they bring to the stage. Usually, I float away and am happy with the world, content that I will see it again the next night. But this time, I left the first night with doubt. So close to the stage, on the first night I couldn't really take in the visual presentation of the show, but I saw and heard Bono imploring us to believe that America is still home of the free and the greatest show on earth. With the aftermath and disillusionment felt after the election, and standing in a state that is broke and a city that is a war zone, it's hard to feel good about America right now. 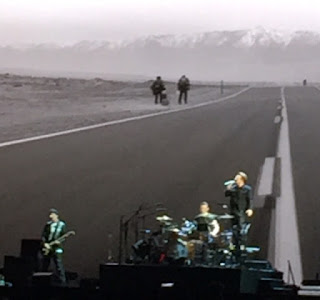 But the good thing about going again is that one gets a different perspective. Pulling back to see the visual part of the show, I was reminded of the beauty of America. The Joshua Tree was a big album as it was the one that catapulted U2 into the sky. No longer small enough to wander anonymously across the land, they embarked on a tour that put them in the midst of the muck. Naive, possibly, with an Irish bravado, they took on the challenge to walk to the mountain top. Lasso big ideas. Give a shit about someone other than oneself. I heard Bono this week reaching to pull us back into the idea that we can be great again ... for real. And that's what, in the end, makes them my band. Forty years later, and still trying to find what their looking for is still relevant. In times like these, it is important to remember to keep looking for the things that matter. The things that will enrich others' lives in making our own fulfilling. Oh, for sure, I'm full of the blarney, but that's how Bono and I can be best friends. Because we are, ya know.
Posted by miss moran at 3:49:00 PM