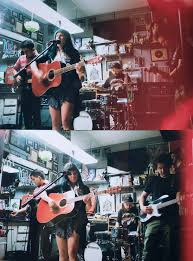 Driving home late on a Sunday evening, the radio played a song, "Persephone," by the Chicago band "God Awful Small Affairs." I liked it. I liked it so much that I was able to remember the band's name and song title forty-five minutes later when I arrived home. The DJ of the new music hour, found the band on Sound Cloud, where I was able to find them. The band lists themselves as 'femme-fatale space rock,' and I saw somewhere that they also identify as folkish. I like the sound, but my thought isn't so much about them as it is about radio.

A week ago, I happened to catch the last broadcast of The Loop, a rock station staple in the Chicago market for more years than most would imagine, before it moved to a Christian rock station. I was surprised by this as I had not read anything about the sale, new ownership, or change of format previous to listening to the last show. And since then, I have read that many radio stations in this market and across the country are struggling to continuing to make it. Apparently, the various and assorted platforms for streaming has severely impacted the economic viability of traditional radio. The country is getting Pandora'd. And, to me, that is bad news. I don't mind listening to streaming radio ... I have friends who regularly listen to this or that band station. The choices pulled to support the selection of one band makes sense and is easy to listen to for a couple of hours.

But how will one find NEW music?

I still listen to CDs in my car. When I get an album, okay ... CD, I listened to it over and over so as to get to know it. In the fall, I was heavy on repeat of LCD Soundsystem. And when U2 released "Songs of Experience" on December 1, I've not listened to much else for 3 months. It was just a matter of time until I would be comfortable enough to pull away from that one CD to see what else was going on. I moved to the radio. And I don't listen to one station ... I listen to many. I'm always looking for the next obsession, I suppose. When I did this, I found God Awful Small Affairs. This band doesn't have a release, except for the seven songs on Sound Cloud. How would I have heard of them if not for the radio program that focused on new music/sound that was sent in by local bands.

I know that my nephew is big into seeking out new music on YouTube, but I wonder how he does that? Or has the time to surf it. The car is the perfect place to find it, especially as I live in a big city and always seem to find traffic. Listening to the radio was the activity for the car, and it was the reliable outlet to find new music.

It's a god awful state of affairs ... everything is changing, and I wonder to what good- especially in this respect.
Posted by miss moran at 2:54:00 PM