In a Sunday magazine read, I open Tatler to this spectacular Chanel advertisement. Tatler is a very guilty pleasure! When travelling abroad in the past, I would pick up Hello! to get my Anglo-fix. Then, much to my delight, I was turned on to Tatler by a woman, who lived in my building and was moving to NYC. In a farewell dinner, we discovered, too late, that we had so much more in common than 2307. We relished in our descriptions of just when we read Tina Brown's Diana Chronicles, and our own take on the gruesome accident and France's mishandling of the princess's life. I had always imagined this woman to be only serious and not prey to the silliness of Anglo-fanning ... oh! the stories of Diana, the lives of those who live on the great estates, and Masterpiece Theater. Now, whenever I get a chance, I find a newsstand and shell out the $9 for half hour of English delight.

Although, I love all things French ... wine, cheese, Paris, the South, couture, cinema, Chanel perfume ... but I believe that I really have an English aesthetic. I have toured the grand chateaux of the Loire Valley, and certainly have been to Versailles, but those, as remarkable as they are, are cold. Aloof. I will admit that I've not been anywhere in England except for London, so my view is imaginary. Though I have spent plenty of time in Ireland, I will not make the mistake of putting its beauty-being in the same sentence as its ... past. What I've seen of England has been in books and movies. And like the Secret Garden, I'm enchanted by the charm of what is not schemed. I appreciate the mess, for lack of a better word, of the lawn, and the labyrinth of wild flowers. In France, the grounds are always manicured, sculptured, and mathematical. And this is awesome, but one cannot lose oneself in a line. I like a zig and a zag, and a 'will I ever find my way out of this.'

Fashion for me is much like the gardens. The French wear uniforms ... very Napoleonic. Women arm themselves with good cuts, excellent fabrics, and step out in essentially the same outfits everyday. Oh yes, they appear effortless, graceful. There is a mystique to the French beauty. I'm afraid that I'm not that mysterious. I'm open. Reader friendly. And the English, though appearing uptight, are actually really very nutty. And their style is reflective of it. Open a British Vogue or Elle and you'll find thrown together looks that are quirky, unmatched, but so wonderful to look at. It's unfortunate that Catherine and Pippa are dominating the English scene right now. They are very uniformed, and I find even with their wonderful figures that everyone likes to discuss, kind of boring. Catherine received rave reviews for that navy, Alexander McQueen outfit that she's worn several times, and I think, oh lord! is she wearing granny's clothes again. She looked like a toy soldier. 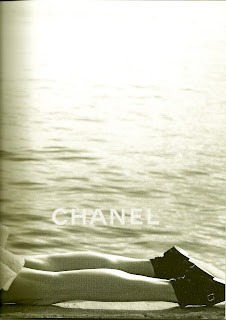 But back to mermaid. When I opened the magazine and saw this ad, I was thunderstruck. The dress is sublime. It is Emma Watson wearing it and she wears it well. A magical dress, a girl with a magical pedigree. I love the styling of the school girl shoes and socks; it is what makes the vision human ... used to a great tail, the sensible shoes will make the transition from swim to walk easier. The dress, if you can tell by the scan, is the sea. It's the froth that covers the beach as the waves hit the sand.The mermaid in her human form, lifts her face to the sky to feel the sun on scale-less skin. Her nails pearly, oystered.

I have not seen this ad in the US magazines ... yet, perhaps it will fall into the March issues. I believe that we can take it on this side of the pond ... we need a bit of otherworldliness to tide us over ...