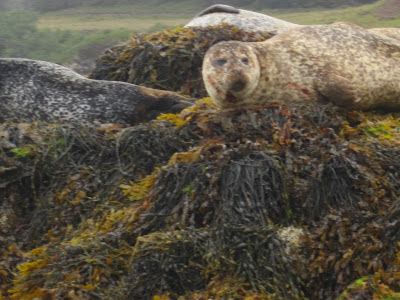 On the northwestern corner of the Isle of Skye in the Hebridian sea lies the island of seals. On a very Scottish sort of day ... overcast, cloudy, and brisk, we set out on a motored dinghy to see these seals for ourselves. Not five minutes out as cold sea air sprayed the six of us on the small craft, we began to see the speckled rocks ... move. Incredibly the color of the seaweed rocks that the seals were sprawled on  lived seals, who lazily looked our way. Some of the blubber'd beasts  looked  me right in the eye and ... blinked in recognition.

The man steering us through the sea had been doing so for thirty years so knew the creatures well. And they were unfazed seeing their old friend. The others on the dinghy had a lot of questions about the lives of the seals, but what I wondered most ... do the Scots believe that some of them might be selkes? Our boatman turned to me, silkies? And the Spanish woman on the boat asked, what is this? Mermaids, he said solemnly . He was the expert, but from what I know of selkes, a mermaid doesn't fully explain the creature. And so I explained to the woman that the selke was a creature caught between land and sea. They are content to live among the other seals, but given the chance, they will go ashore, take off their seal coat, and stretch their limbs. If a young man comes upon a seal who has taken her coat off (yes, they are women and so the idea of mermaid comes into play), he can claim her for his wife. He must, of course, hide her seal coat so that she does not return to the sea. The selke makes for a good wife and makes her man happy as long as she lives near the sea, but it is the sea that constantly calls her back. If she finds her coat, and she will look for it, she will return to the sea with a ... heavy heart. I explained to the woman that this was the Irish legend; to which the boat man said to all, quite heartily ... well, if it's what the Irish say, then it must be true!

Of course the legend of the selke may have its root in what I found in a line at the castle where we boarded the boat ... there, fairy magic was built into the legend of the castle's clan's history. And some one noted, given the long lineage of persons inhabiting the castle, that 'fairy stories are difficult to relate to fact; they often substitute for forgotten fact.' If that isn't true of an Irishman, I don't know what is. Some say that the legend supports how the dark ones came to be on the island (Ireland). And it is the dark ones that are as at home on the land as sea. Of course it is likely that the dark ones are the progeny of what was the mix of Irish and Spanish blood ... and the sea? The Spaniards sailed into the island and ... never left. I am of Irish heritage ... with a Spanish surname. I think that I know of this legend ... 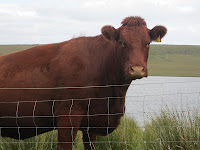 Several years ago, on a trip through Ireland, I determined that my sister was a selke. Oh, she is not dark ... but she was absent as I stood on the mount that the fairy queen had done battle looking out over the sea. On the path down, one brown cow looked me dead in the eye and I recognized ... her. And so the legend of my sister, the cow-selke. Anywhere I travel, and I find myself close to a herd of cows, if there is a brown one in the mix, all that I have to do is call her name, and she looks right at me. Many might find it ... distasteful that I call my sister a 'cow.' But she isn't a cow, she's a selke. She is a legend and understands it.

And here, in the highlands, she was here. As I called her name out over the green pasture, she turned ... and like the seal on seal island who looked me dead in the eye ... my sister found me.
Posted by miss moran at 2:02:00 PM