﻿﻿The Duchess of Devonshire and her Chatsworth home is what drew me to the Peak District in England. Landing in Heathrow, we immediately took off to this lovely area north west of England to check it out.
Years ago I had read the biography of the Duchess of Devonshire by Amanda Foreman. This Duchess was a contemporary of Marie Antoinette. She led an interesting sort of life ... married to a man that she did not love, he not to her either and actually moving his mistress into the house. She had a passion for politics and gambling. She also had an elicit affair, which produced an offspring that she was not allowed to raise. I imagine that there was renewed interest in her at the time the biography was written as Princess Diana is a descendant. That alone wouldn't have brought me to Chatsworth, but the very living Dowager Duchess, Deborah, is something of a force. I've read many articles, mostly in British magazines, which has chronicled her life. Having visited now, I understand the huge amounts of money that must be necessary to keep the estate going. I don't know how many years ago at the moment, but the family decided to open up the house to the public, and create a marketing plan to sell Chatsworth ... from fowl to figs in order to sustain the heritage of the area. The lawns were full of visitors ... stopping at the house yes, but more were there with their families enjoying the grand lawns and gardens.
﻿﻿﻿﻿ I have to say, the house was nearly overwhelming. It is chock-full of stuff! And for the most part, for ten British pounds, one has the run of the place. The most surprising fact ... photographs were not prohibited. Centuries old tapestries, paintings, furnishings ... at the mercy of hundreds, if not thousands, of flash bulbs a day.Goodness.

In one tiny, corner chamber, on display was about 50 drawings by the Masters. And I do mean Masters ... Rembrandt et al. They hadn't been on display for over one hundred years. They were quite spectacular ... I didn't dare take a photograph. I wouldn't want my flash to dull one line of the work. 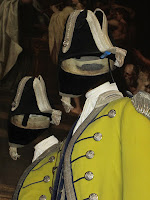 As it is Queen Elizabeth's Diamond Jubilee, artifacts of her Coronation were displayed as well. The Duchess of Devonshire is the 'keeper of the robes' or some such thing, so the house played a role in it. At the entrance to the house, the first exhibit is of the carriage that the family rode in for the Coronation. I loved the horsemen ... they were ghostly! The carriage was not as grand as I've seen in London before at the Queen's Mews, but it would do in a pinch. The actual dress that the Duchess of Devonshire wore for the Coronation was also displayed ... her cape was trimmed in what I believe to be is ermine fur.

Time to push on ... the size of the house and all of the things to see was becoming too much. We decided to go down the road, round the sheep ... the drive was quite literally through the pasture and instead of moving away as more visitors came, they seem to come closer so that they could get a good look. Bleating by, we headed to Haddon Hall on the other side of the village where we were staying. A Tudor home of a wealthy family ... what would be there?

Haddon Hall has been in the family of the current owner for 800 years. Can you imagine? The family entertained royalty, but was not themselves royal.  I fell in love with Haddon Hall and if I do not return to life as you know me to live in, you'll find me in residence with the ghosts of the Hall. Perhaps it was just that it was quiet and my imagination could really open up to what life might have been.The Hall, which was occupied up to maybe 60 or 70 years ago, has in it only some furnishings (most medievally aged), no apparent facilities, and since it has wonderfully abundant gardens, vases full of lovely flowers fresh cut each day. 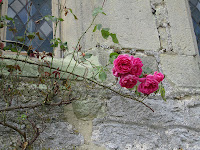 The buildings, connected rooms, were built around a courtyard. Lovely roses grew wildly in the cracks of the old brick and mortar. The chapel was large and the stained glass had really lost a lot of their color through the ages. Bats were not in the belfry, rather they lived up in the rafters and were left. A sign posted said as much.

The room that I really loved was the dining hall ... it was cozy and dark ... though not in any wrong way. The long table was original to the house and many meals were served there. In one room, a DVD played of the taping of a re-creation Tudor feast. One of what must have been nearly 50 dishes was a peacock meat pie. The chef carefully skinned the bird and put it aside. Made the pie. Then carefully shaped the carcass of the bird over the pie as ornamentation. I don't know about that! I think that when I'm there with my ghosts friends, I'll make a more contemporary feast ... not quite so revealing and apparent.

I do have more of a story of Haddon Hall. But I will have to save it for another time. I also have to tell of the inn keeper called Vince at Fold Farm where we stayed! But this entry has taken me FOREVER with what is limited technology and my fingers on a very small keyboard. I hope to report more as I sit here sipping tea ... imagining my supper with my friends at Haddon Hall.﻿﻿﻿﻿﻿