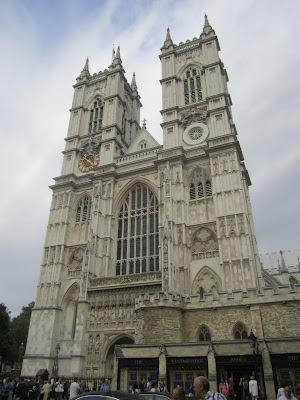 Westminster Abbey hasn't changed much since the last time that I visited in ... oh, 1991. Oi, has it been that long? Yes, it has been that long and from what I remembered of it, it didn't cost 16 GBP. I imagine the cost to keep the place up is dear ... I don't mind supporting it.

This time 'round, rather than just rambling around inside of antiquity, I signed up for a tour ... only 4 GBP for 90 minutes with a verger, a guy that's only job is to know what's for and change the linens (he told me that!).
We had to battle the crowds, but he'd get us in a small group and give us more that we could handle. My mind was numb with trying to keep up with the lineage, the Kings, the Queens ... she had 16 children?Worth the numbness ... first, we were allowed to sit in the choir loft ... well, it's not a loft. You've seen the pictures ... the row of seats very near to the alter. The best seats in the house with the most light ... the little red lanterns were adorable. As we sat there, he spoke about THE wedding ... as we had walked up the main aisle to the choir, I couldn't help but think of Kate and the trip that she made up it. She had a long road to go to get to her man at the end ... more ways that one I imagine. Sitting there, I gazed up at the side doors and wondered what went on as the group moved to the back to sign the registry on the wedding day. I don't have to imagine ... because he took us up a little side step and through a door to the room behind the altar where among dead Kings, Queens, and a saint, William and Kate signed their marriage into the books. So super cool.

Our verger was an odd sort, swirling his black cassock around as he led us from one point to the next.
As we moved forward, he pulled up next to me and said, 'Where are you from?' I told him. 'First time to London?' No. 'First time to the Abbey?' I slapped him with my map as in no silly, 'I was here for the Wedding.' To which he wrinkled up his snout and clasped his hands together, 'Oh! I was here for that!'

I wonder what that verger does when no one is around?
Posted by miss moran at 2:46:00 AM