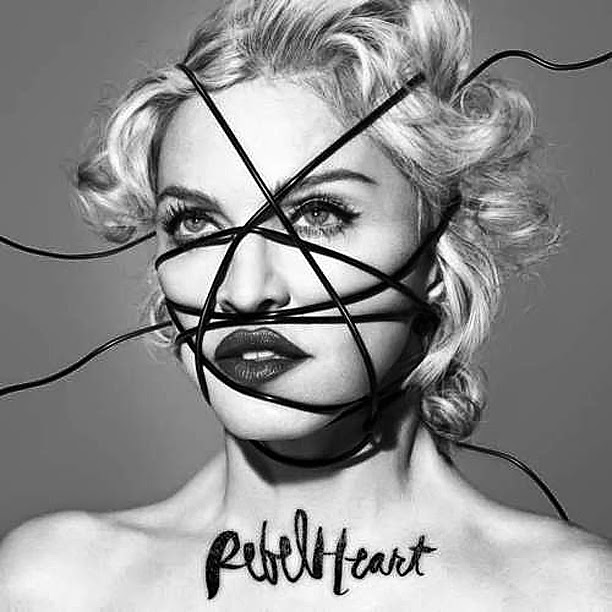 Oh Madonna. How do I love thee? I took a chance and with fingers crossed purchased the newly released songs from your upcoming record, "Rebel Heart." I had heard that you were up to something and surrounding yourself with talent ... but one never knows with you. Like Prince, I'm not always sure that you take council outside of yourself, and that can be a dangerous thing as musically, though widely successful, you may not have all of the skills to put a solid record together on your own. Although I had a brief affair with "MDNA," your last record, it was fleeting and left repeat quickly.

But I will always give you a listen 'cause I love you. And bitch, you're Madonna.

On the first listen of any Madonna record, one has to make peace with the fact that Madonna is not a poet. And since lyrics are what drives many of my favorites, it is difficult to digest the trite that Madonna serves on the regular. One of the exercises that I like to partake in is identifying symbol-trends in various artists' lyrics. In U2, you'll find the sea often woven into the songs, which makes sense because the boys, in particular Bono who writes the lyrics, are Irish-islanders. It is a cultural connection that is very literal and often mythical. I like it. In Wilco, especially when Jay Bennett was in the band, the idea of a photograph/camera is in many of the songs. Since Jeff Tweedy sort of is a tour guide of his heart, his city, his life ... this makes sense, and I enjoy finding it in a crazy Where's Waldo exercise. For Madonna ... Catholicism, heartache, and partying take precedence over all. Just like a prayer, she finds any excuse to get on her knees, call to Mary, and at the same time, try to piss God off. On this record, she sings about partying a lot, and at the same time, she warns of how that interferes with what is really at issue: finding spiritual peace. But that's Madonna and, dare I say, women. In Ireland, the tradition is that women are virgin, mother, whore. It's a triptych that is a challenge to uphold, to serve. If Madonna was more the poet, maybe she would be more successful in tying that together and weaving it through every 4 minutes.

But I don't want to hate. And though in the first couple of listens, I cringed a little at some of what Madonna sang, in a rollingstone.com interview, she shed light on what each of the songs means for her. Her spoken word made more sense of what they were about. And that helped me in. Then, in reading the January 15th "Rolling Stone" interview of Nicki Minaj, who appears on Madonna's album, I found another clue. She says of her pop song writing, "I don't focus on lyrics in those kinds of records. It's meant to be like, 'If you don't speak English, you still know it's a fun song, just from the tone and the cadence."

So with tone and cadence, I went in and found the party. "Rebel Heart" is one of Madonna's best. It is a dance party, and it covers it. If you like a big gay anthem, it's there in "Living for Love." If you like her ballads, which she can do, you'll love "Ghosttown." And if you're into dub step and EDM, you've got it with Avicii at the wheel of "Devil Pray;" and Diplo with "Unapologetic Bitch" and "Bitch I'm Madonna."

"Living for Love" is one that I imagine I'm in a huge club, the bass is pumping, and I'm surrounded by hundreds of muscled men dancing all around me in various stages of undress. Madonna's heart is always broken, but she is always hopeful. She sings, "I'm going to pick up my crown, and I'm going to carry on." It's an anthem that is driven by Alicia Keys pounding on the piano and a gospel singer. What's more old school Madonna than that?

"Devil Pray" is the hardest to swallow and not because of the beats. Avicii is all over it, and I think that Taylor Swift would find the 'sick beat' that she's looking for if she asked someone who actually knows what that is. This song would be so awesome if Madonna had lost the chorus. It's dumb. "And we can do drugs/And we can smoke weed/And we can drink whiskey ..." Dumb. It works because the transitions that Avicii makes are Eastern-like. Madonna did this before with "Frozen." I don't think she goes here enough ... to the East and darker. She said in the rollingstone.com interview that Avicii's writing team took her two places: light and dark. I like the dark; it works for her. And the religious imagery is fine, oh but the chorus. It's so teenagery. Leave that to Lourdes, Madonna.

"Ghosttown" is magnificent. Madonna can sing a ballad. It's "Don't Cry For Me Argentina." It's "Live to Tell." She sounds sincere. And there's a narrative that is believable. Billboard produces it with Madonna ... I'm not sure who he/she/what that is, but it's a beautiful song. After listening to it 50 times, I can begin to break it down, and one of the things that I love is that during the chorus there is a ghost of a man's voice singing with her. He is barely perceptible. It's magic. And it sticks in my head, and I hear it over and over again to my delight.

"Unapologetic Bitch" is pure Madonna. She sings about another boy leaving or being left, and she sings, "I'm popping bottles that you can't even afford/ I'm throwing parties and you won't get in the door/ Said it. Did it. Loved it. Hated it." I love it! I've seen pictures in the magazines of Madonna and her 'boys,' and I wonder what they must think? Cause they can't afford those bottles or get into those parties without her. She continues, "You know you never really knew how your selfish bullshit cost me/ oh, fuck you." If you have half a brain, you have to know that she is the power. And I love how she understands this about herself ... and is unapologetic. Plus, the song has beats.

"Illuminati" hits close to home. My students all think that Beyonce and Jay-Z are Illuminati. And you cannot persuade them otherwise. And here Madonna is spelling it out that the Illuminati isn't what you think it is, but if you want to say she is ... go ahead. And who produced this bounce ... Kanye! That makes perfect sense. Madonna raps on this track. And I like when she does it. The one tiny problem with this track is that she moves from her very monotoned, low toned rap to her Madonny-autotuned voice, which is too plasticy in contrast. I would have brought her down tonally. The repeat is infectious, "It's like everybody in this party is shining like Illuminati." I feel it.

"Bitch I'm Madonna" says it all. It's EDM'd out ... and Nicky Minaj is a great co-conspirator. They go together. I don't really like the word 'bitch.' But I don't know how else you would call it. She's partying again in this song, and wouldn't I like to be along for that ride "right up to the rooftop." I had a boss once in what I would call a 'young' business, and many would write him off because he was of an age. But that dog knew his tricks, and I learned a lot from him. I would say the same for Madonna, she knows her tricks, and she has pulled a huge, fluffy rabbit from her hat.

Repeat. Repeat. Often. This is my new year's jam.