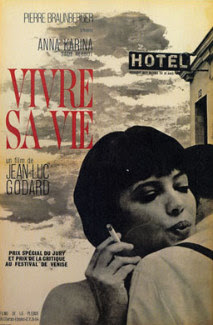 "Vivre Sa Vie," directed by Jean Luc Godard, was captivating. Told in tableau, each a bang on a bass drum that measured out the life of the protagonist, a silly, young, directionless woman, who, looking to climb up, falls down ... and as far down as one would hope to not.

At one point, she writes to a Madame for a place in her brothel. Her hand is shaky and unfamiliar, it would seem, to putting words to paper. Her self-value is her 'jolie' and her height. It's no wonder that our girl gets herself into the predicament that she does, but the film is exquisite. The story is cinematically told ... gorgeous screen shots filled the screen of her face that has not yet been colored by a life of experience.

Her face will never change for what becomes of her, but that wasn't as sad as for the fact that the film was over. No, the story arced and resolved, no more was necessary to be said ... but it isn't every film that is as provocative for the craft with which it was produced.

Honestly, I don't have the words in this southside mouth of mine to do justice to this film. What I can say is that this is only the second film that I've seen of Godard's, and as soon as I'm finished here, I'm going to sign in to Netflix and put every one of his films in the queue. I can't wait to see what else that he has in store for me.
Posted by miss moran at 5:54:00 PM