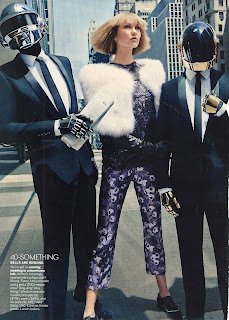 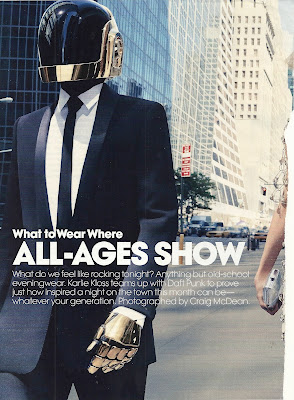 Here are my favorite French robots again in the pages of Vogue (Aug. 2013). They are having a good summer, a lucky one as it were.


The brilliance of this band shines through their signature helmet heads and beyond the nice cut of their suits. For the shoot, apparently, New Yorkers rushed to take their pictures, not the 'random model' as my nephew calls it. But once the shoot was over, they slipped off their signature and went anonymously to lunch.

I've been reading a lot about these robots of late. The best in-depth interview appeared a couple of months ago in Rolling Stone magazine. It walked through their process to explain how they are working hard to not only dominate Electric Dance Music, but move it beyond what most expect is the extent of its creative force and dominance.

They seem to be a couple of somewhat shy, 30-something Frenchmen who like to dance, but like to tinker more.
Posted by miss moran at 7:23:00 AM