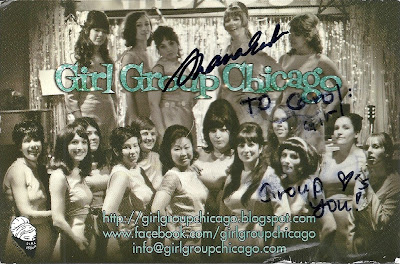 Maybe if I didn't spend any free time  that I have hanging out, I would have more time to write! But how could I resist the great outdoors, a cold beer, and great music on a Saturday afternoon into evening! I haven't been to the Hide Out's Block Party since I met my brother Glen Hansard (just a joke! And if you've been keeping up, you know that story already), and what do you know ... this time 'round, I met my sister! I'm kidding of course, but it's funny that first I met him, and then I met one of the singer's from the wonderfully entertaining Chicago band: Girl Group, and we three could all be kin. The Girl Group is a riot. What musical girl wouldn't want to be a part of this band. They have it all: talent, fun, and great hair. I can't play an instrument, or sing, but I could be a go-go dancer, and they pack their own. 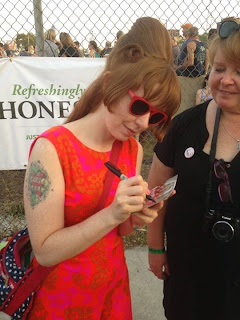 One of Girl Group's 'people' worked the crowd during the show with snazzy postcards and buttons. I took a postcard and a button. After their set, one of the singers came through and stopped for a chat. I thought of the postcard, and asked her to sign it for me. That's what I love about small music festivals ... the musicians are so accessible. And the stage is so close! She was, and I'm sorry to say that I didn't get her name, was delighted to indulge me. I told her that I would frame it and hang it on my wall of ... let's just say other stuff of its kind. No one had a pen, so her 'assisstant' went running to look for one. We got to talking in the meantime, and when I mentioned the woman that I saw who had peacock colored eyebrows, she said, 'that's the girl who does our hair.' Before every performance, all of the girls get their hair and make-up done. I asked her if she used a bump-it (my students love the bump-it), and she said no. Apparently, it is all them. The pen arrived, and I got my autograph. The picture taken here is on the band's Facebook page. I don't subscribe to that particular social media, but a friend was good enough to send it along. It was exciting. I think that I handled it pretty well. Certainly better than if, for instance, I ran into Bono and asked him for an autograph! This was definitely a win-win. I got to be a fan, a role that I was born to play, and she got her first autograph!

What a lark! And then ... Young the Giant. I had to put my serious face on for this group. The sun had set by the time that he hit the stage. The spot light rarely, if at all really, touched him, yet he was luminescent. Sometimes, I don't know if it's the night or the way the moon is positioned in the sky or that it was meant to be, but when I saw Sameer Ghadia hit the stage, I was ... lost. If I allow myself too many words, I may waste them on pure cane. So I will resist. And say that for a day that I didn't think that I would get too late into out in the world, he pulled me up and set me down. His voice could sing to me always, and his power reminds me of, dare I say his name twice in one writing without revealing the one that I really love, Bono. I'm still trying to process ... him. Yeah, I can get like this. When I was a  kid, it was David Cassidy that I couldn't get enough. And from him to others, I've always found a voice, a look, that I can get hooked up in. Doesn't everyone? Or is it just me? If it is, that's fine. Four people away from the energy that he emanates from the stage is just fine by me.