From the pages of the September Vouge ... you may very well have a subscription or buy off of the rack, but I thought that I would share the images that I found exquisite in the "Cinderella Story" editorial. 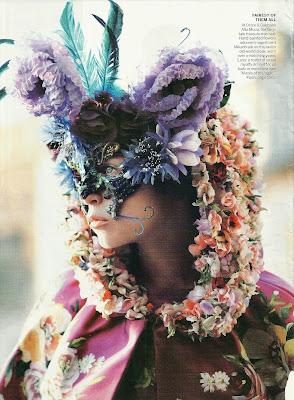 This first dress is a statement, si? This is a Dolce and Gabbana creation shown in a Venetian palace. Several designers are showing painterly work this season, and I rather enjoy it. The headpiece is phenomenal and reminds me of Spain, not Venice. Perhaps, it is a tribute to Carnivale, but even the pose looks flamenco. I would love to see the model move into the next step to face a partner for a impassioned pas de deux. You don't suppose that she has a tap shoe under the folds of her dress? For the size of it, there is no telling what is hidden there.

Here is another head piece created by Dolce and Gabbana. I have been known to feature a beautiful creation such as this in this blog before. I know that this cannot be made of fresh flowers, but can you imagine how lovely it would smell if it were? If you notice, the cape worn with it is also stunning. I love the rich, saturated pink and the bold flower. Nothing is demure here, yet it is delicate and feminine. Wearing it, I would imagine, would afford one a floral, not rose, colored view. What would the world look like, I wonder. 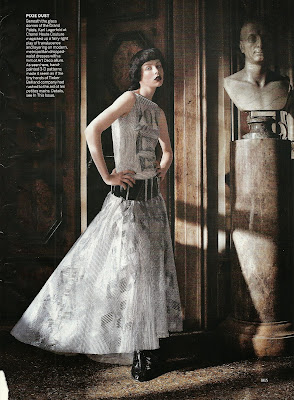 The description of this creation by Karl Lagerfeld on the left does not adequately describe it in my opinion. It's titled 'Pixie Dust,' and says the dress is "magicked up a fairy-light play of translucence and layering on modern, metropolitan dropped-waist dresses with a hinge of Art Deco allure .... as if the tiny hands of Tinker Bell and company had rushed to the aid of les petites mains.' 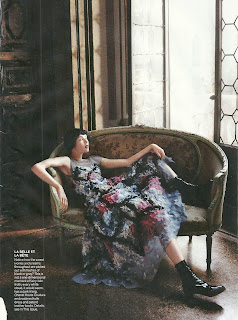 In my view, I think that 'les petites mains' fashioned a PUNK rock couture dress. It may be how they've styled the model with the dark hair and lip, and shiny black boot, but if it were still 1985, and I was still dancin' at the Smart Bar or Neo, this is what I would want to wear. I am tempted to say that perhaps the white and black need a reverse ... my punk was always pretty dark, but the white now seems very forward. It is a modern white wedding dress. Billy Idol would look even better leathered up next to this creation. 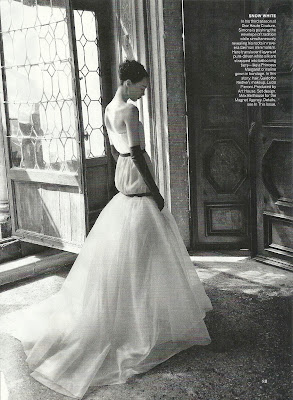 The dress on the right of the first punk look is also Karl Lagerfeld. Dare I say that it is also punk, not fairy tale ... well, unless of course your idea of a fairy tale is punk. I think that Cyndi Lauper is out on tour now, and this seems the perfect dress for her. Come on Vogue ... when does Lagerfeld ever do Cinderella? Of course one has to include his work as it is always noteworthy, but it would have been better to start off by saying that we do not have a Cinderella here. It could be a fairy tale as we know those to be dark, and so punk.

To the left, this is a lovely, almost Audrey Hepburn-esque confection by Dior. The white is so pure. So delicate. And the ribbons control the purity so that it doesn't become too meringued, too floaty. Of course, it is styled beautifully. The gloves are perfect.

I do wonder, however, if the strap around the derriere could ever really translate to a gown that every woman could wear. Of course, couture is not for all. It is a vision ... a statement. And this certainly makes that. 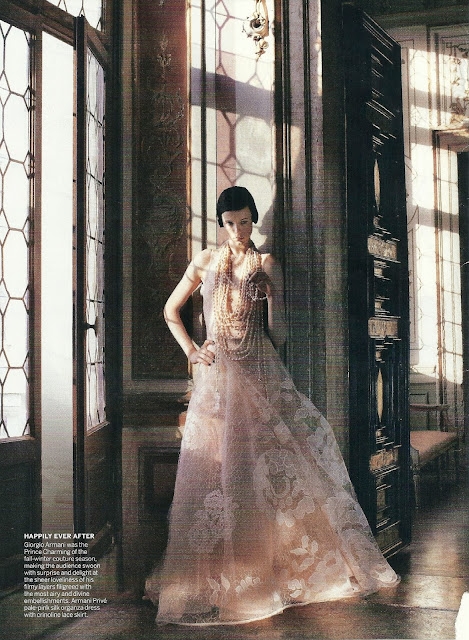 And this is the one for me. Giorgio Armani: not a designer that I normally move toward. At first look, I thought that this was Chanel. Why wouldn't I? The pearls. And I think that they are what drew me to the dress. I love a pearl. Reminds me of my grandmother and hers.

The color of this dress I really like too. A sort of blush, like a whisper. The flowers  remind me of Queen's Anne Lace. As a child, knocking along the roads near to my grandfather's cottage, I couldn't collect enough of the spidery, delicate wild flowers. This embraces all of that dream ... the wild is the overuse of the pearls. Why stop with one strand? Why not bathe in their iridescent delight. And the delicateness of the frothy fabric is a contrast even though they are nearly the same color.

As I said, I'm not as familiar with Armani, but for this ... I will look a little closer as this dress is divine.