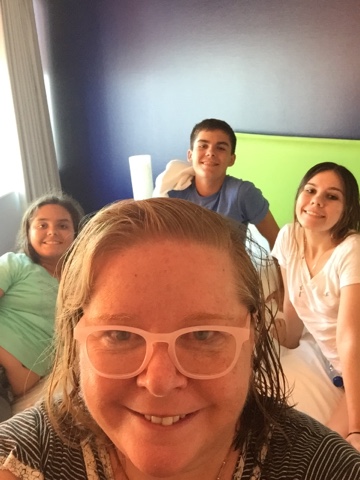 We are traveling with 7-7. Seven people, seven suitcases, and various and assorted carry-ons.
First, we all had to get to the airport. We couldn't all fit in grandma's car with 7-7. The eldest child, now a college junior said, let's Uber. Said child's parents weren't too sure of that plan. So they checked out rental cars and other forms of airport transport and worried, worried, worried. I decided to stay out of the cray and go to my apartment to pack and Uber to the airport on my own. I knew that was the best option. To Uber? No, to stay out of the worry. In the end, Uber was successfully navigated, and two cars took six people and 6-6.
The flight to Paris via Dublin was seemless and enjoyable. We made connections, 7-7 didn't get lost, and we all managed to get a cup of coffee.
Aha! How do we move this parade from the airport to the city center? This is not my first time visiting Paris! I knew to take the suburban train to the center of the city and satellite out to accomodation on the Meto. Of course, I was younger and happy to schlep my bag because I was usually with my good friend who insisted that we have 2-1 (2 people and approximately 1 suitcase between the two of us). It is a much different thing this with 7-7 and worry-worry!
We dragged and pushed and up'd and down'd more than I ever remember happening. At this point, I was wiped out. And we had gone up the same staircase more than once because worry wasn't sure which direction to take. And I have learned that I assist when called on; otherwise, I wonder at my own sanity. At one step, the decision was made so late to get on the train and I was 7 of 7 boarding. The doors started to close and my nephew, truly trying to help me, grabbed my bag as the door grabbed my shoe. I thought that I was a goner, but he was able to pull me and my bag on to the train. My nephew became very protective of me and made sure to keep track of my 1-1. I told him my idea that schlep was no longer a romantic notion, and I would rather be picked at the airport in a car to be whisked to my accommodation. He agreed.
Once at the hotel, I had to hide behind the curtain because my brother in law found an apartment for a 6-6, not a 7-7. He had to turn in passports to verify the number, so I am surely to be arrested and locked up in a French jail with no way of getting in contact with my traveling posse. My niece suggests that I call grandma back in Chicago to take care of it. I think that she may be right.
Here are the four of us who are awake. Worrier marched us around in a very warm midday sun to ensure that we areable  to sleep normally tonight so that we can dive in tomorrow. They are sound asleep while the TV blasts the Clinton email crisis hearing. The four of us took showers, found some snacks and are having a cellphone party in a room away from the snores.
Paris is great!
Posted by miss moran at 11:52:00 AM