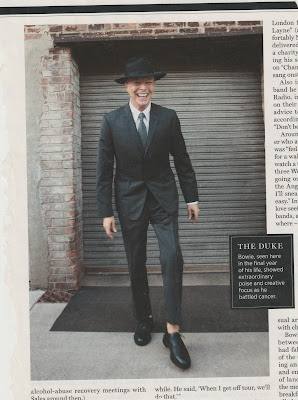 Last week, I went through "Peaky Blinders" again on Netflix. When I got to the episode where Tommy is laid out on a gurney, beaten to a pulp, Bowie's "Lazarus" plays. Apparently, Bowie was a fan of the show and gave the producers authorization to play it. "Look up here/ I'm in Heaven ..." Tommy looks like he's near to Heaven, and the song makes it all the more real with its whining saxophone.  It's a stunning scene that, were it not for the song, it would not be as provocative.

I ripped this page out of "Rolling Stone," I'm nearly certain of it. It may also have been the last photograph taken of him if I'm not mistaken. There is no caption or credit for I have only this. I ran across it while I was sorting through a pile of papers. It struck me ... dumb. What could I say? I spent so much time with David Bowie from the end of last year to the beginning of this year's Spring when I couldn't listen to his album anymore. And it is strange to consider that he won't be making any more music when I found him once again. It's stunning. And he looks so alive when he was so close to death. I suppose that's what we can all only hope for.

Tommy Shelby recovered. And I will add that I love the series in its entirety, but the Lazarus scene is the one that separates the show from others. It's beautiful and poignant for its connection to more than a Gypsy family trying to come up in post-war England. The song expressed more than what the actor could do on his own. And Cillian Murphy, who plays Tommy Shelby, is no slouch.