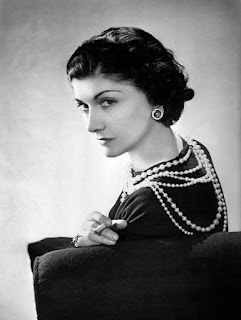 2. Chanel No. 5 was one of the first fragrances to be named after a designer, and is said to be a tribute to Coco Chanel’s lucky number. The story goes: In 1920, Chanel commissioned Ernest Beaux, a Russian-born Frenchman and former parfumier to the tsars in Russia, to create her debut perfume. After 10 months of work, Beaux laid out 10 different vials, numbered one to five and 20 to 24, for the couturier’s review. She chose the fifth, perhaps on blind superstition. As she reportedly explained to Beaux at the time: “I present my dress collections on the fifth of May, the fifth month of the year, and so we will let this sample number five keep the name it already has; it will bring good luck.” And that it did. By 1929, Chanel No. 5 had become the best-selling perfume in the world, and, ultimately, one of the most timeless scents in history. To this day, a new bottle is apparentlypurchased every 30 seconds. (From Vogue.com)

When I went to Bloomingdale's in NYC last week, we came across the Chanel counter in the Cosmetics department. I was surprised to see that they carried the entire line of Les Exclusives: A unique collection of fragrances, composed in the past by Ernest Beaux, perfumer to Mademoiselle Chanel; composed in the present by Jacques Polge, House of Chanel master perfumer. Each work draws its inspiration from the life of Gabrielle Chanel: poetic testimonies to legendary places, materials she loved, and the symbols that always followed. An essay in the perfumer’s art; a timeless statement of style (Chanel.com).

My grandmother introduced me to Chanel #5 when I was a girl, and it has been my signature scent since college. I always have it and the luxurious cream on hand. It connects me to her and the elegance that I perceived that she had. My mother was born and raised in Iowa and thinks, still does, that putting on lipstick is 'war paint.' My grandmother, on the other hand, had a cosmetic bag full of powders, rouges, and mascara that I would sneak into when she visited. I remember clearly, her pink, perfectly manicured nails and the way she would drape herself in a pose across our living room couch as if it were at a fine hotel or salon. Even when the couch was old and my mother disguised it with a sofa cover in a chaotic green leafy print, grandma Anne still managed to look elegant sitting upon it drinking her cocktail that she probably had my brother make for her.

When Chanel's Les Exclusives line was first introduced, I couldn't wait to go to the Chanel store on Michigan Avenue to test them out. In introduction, there were five fragrances. Only large bottles of the elixirs were available, so the cost was dear. If I was going to make the investment, I had to be sure that I chose wisely. And here, years later, and several bottles having been spent, I find myself talking to a young man at Bloomingdale's about Chanel perfume. Since the introduction, many other scents have been released. I wish that I could take a small vile of each home to sample over the course of however many days it would take me to try them all. The first one that I purchased was Bel Respiro ... a very natural, tree-like scent, which I like, but still have some these few years later. I moved to Cuir de Russie, which I liked very much; until, I found Jersey, which I have blown through two bottles of very quickly.

In our lovely New York Bloomingdale's conversation, we talked of Chanel #5, and he told me the story of how Coco chose the scent and the iconic name for it. Coincidentally, Vogue.com deposited a '5 Things You Didn't Know About Coco Chanel' to my inbox within days of that exchange, and the story above, which is similar to what he told me, was told. As as a story teller myself, I don't mind that it wasn't entirely accurate, as if we can wholly believe what is written in Vogue. I doubt that Coco Chanel kept a precise dialogue of the exchange between herself and her 'nose,' the perfumer. I love all of the stories. And I am forever grateful that the perfumes were created because life would not smell as beautiful. I did not buy a bottle in NYC; even though, I am in need of a Jersey refill. But I traveled with carry-on and it would be a crime against fragrance to buy a bottle only to be confiscated at airport security. Not to worry, I always have Chanel #5 on hand. It would be a dark day when that did not sit on my dresser.
Posted by miss moran at 9:56:00 AM