Season 10 is under way! I was surprised by the premier last night ... I was thinking that it didn't start until next week. Quel surprise! Project Runway is the only reality television show that I watch truly and faithfully. I've loved every minute that it's been on the air. Have I always agreed with the judges? NO! Mondo should have won, not whoever she was from Oregon (?) that did! Can I impersonate Heidi Klum? Yes! Nod in agreement like Michael Kors? Yes! And ignore most of what Nina Garcia says? Yes!  So here we go ...

With the first, 'huh?!' Christopher is the winner of episode one's challenge. The dress on the left is the one that he brought from home. Oh the judges ooh'd and aah'd over it. Was it constructed well? Sure. But I just can't get over the color of it ... and the diamond shape cut-out at the waist is a bit much with so much leg showing. Patricia Field, a guest judge, said something about the fact that he made something beautiful out a granny fabric. If you are bringing a representation of your aesthetic to the show, why would you bring something that you made from a granny-fabric? The judges weren't really happy with the little black one that he whipped up for the challenge, and I wonder if it fits at all through the bust. Christopher did have to make alterations to it because his model came in two inches smaller than his measurements.  My 15 year-old niece loved it. She said, "Of course I love it. It's black and tight!" I expect more than that from a designer. 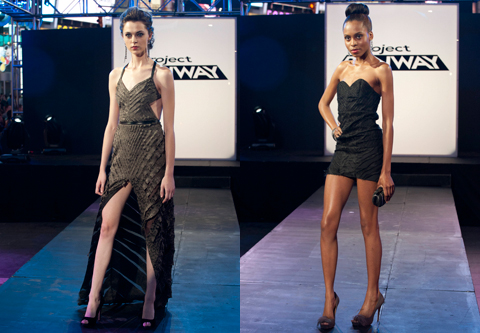 The winner should have been ...

Ven Budhu? He is the most unlikely looking of the designers, not that looks have anything to do with it. This look (left) that he brought with him is lovely and strong. The bustier is beautifully crafted, and I love the pleating of the pants. They flowed down the runway. I wouldn't be the first to buy a white suit, but this one? I would buy it in a minute. It's georgeous. Constructed, yet fluid. Strong, yet feminine. And as Nina likes to comment often, "It looks expensive." The dress that Ven made to compliment the suit as part of the challenge was also good. Not as good, but not one that I would think would have a hard time selling.

On the other side of the spectrum, the bottom two both needed to go home. They should have just taken care of that right away. I'm not really sure that Gunnar needed to come back for a second shot of it. He's just too ... too muchy. And he's all about well I don't like Christopher because he's too much like me. Say what?! Auf Wiedersehen!


The designer that I want to watch is Kooan. Oh yes, he is silly! And is very Japanese, but let us not forget ... the Japanese are crazy about fashion! And they mix it up more than anyone does! He brought Hara Juku for his first showing, but I'm thinking that one, he knows how to cut and sew; and two, he's probably going to kick ass on the strange materials show. And I wouldn't be surprised if he didn't sew a stuffed animal to one of his dresses. That would be fantastic! What would Nina and Michael have to say about that! Right off the bat, Michael said something about his silliness ... come on Michael, don't you have a store in Tokyo? I don't know if he does or not; but if he did, he would know that about the culture. Oh, Kooan will be interesting to watch and worth keeping around to see what he comes up with next!
Posted by miss moran at 5:07:00 PM